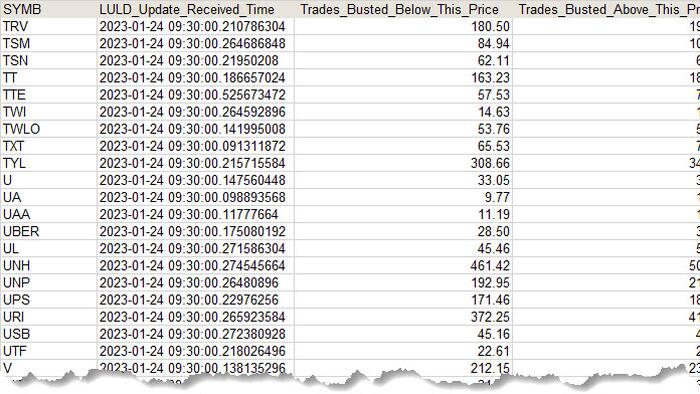 
Nearly six hours after the NYSE failed to conduct opening auctions in hundreds of names  which led to sheer price chaos, LULD halt triggers and dozens of freaked out traders, moments ago the New Jersey-based stock exchange gave some additional detail,  noting that a “system issue” – it is still unclear just what that was – resulted in continuous trading of certain securities commencing at 9:30am ET without an opening auction print. As a result, a number of Core Trading Session trades occurred prior to the receipt of Limit Up Limit Down bands; these trades are eligible under to be reviewed as clearly erroneous.

Here is the full statement:

In other words, all trades that did not enter the opening auction and went straight to open trading status are being busted. However, many other clearly erroneous trades will also stand.

The NYSE also published a list of the 251 companies whose trades it is busting below and above a given LULD band. What is concerning is that many clearly abnormal trades within these bands will stand – for example all XOM trades between $106.90 and $118.15 and all WFC trades between $42.57 and $47.05 will remain – leading to huge losses for anyone who had a market open order and who was stopped out in the opposite direction of the price spike; alternatively it will also mean sizable gains for anyone who was on the other side of the trade.

Traders and portfolio managers were stunned by the magnitude of the apparent moves profiled earlier. Wells Fargo appeared to have crashed 15%, Walmart looked like it wiped out $46 billion, and AT&T seemingly swung between a 20% gain and a 21% tumble in a matter of seconds: for many traders these intervals will stand, and mean the difference between huge gains and losses. Here are some trader anecdotes from this morning, courtesy of Bloomberg.

“It scared the hell out of me when I first saw it, one of my biggest holdings was down 12.5%,” said Matt Tuttle, CEO of Tuttle Capital Management. “I would be surprised if some people didn’t end up getting hurt in this. Yes they halted the stocks, but there were trades before the halt and I don’t know what you end up doing about that.”

Ken Mahoney, CEO of Mahoney Asset Management, said he was trying to sell stocks like AT&T Inc. and Exxon Mobil Corp. on the initial pops. “We also thought maybe there were some arbitrage opportunities within the ETFs that hold the affected stocks,” he said in a message to Bloomberg News.

Meanwhile, Jonathan Corpina, senior managing partner at Meridian Equity Partners who is usually on the exchange trading floor but was working remotely on Tuesday morning, frantically relayed information to customers and traders. “My traders on the floor are getting pummeled,” he said. “All of our phones are lighting up. All of our customers are calling asking what happened.”

“It was a bit of a scramble,” said Justin Wiggs, managing director in equity trading at Stifel Nicolaus. “We had quite a few names affected. But once it got to critical mass where more tickers were impacted, investors got less frantic since they realized it was a bigger problem than just the one ticket they had an issue with.”

“I can count on one hand ever since the advance of technology since the early 2000s that something like that has happened at NYSE,” said Kenny Polcari, senior market strategist at Slatestone Wealth who spent four decades at the NYSE. The issue likely affected day traders and those who use algorithmic trading, but not long-term investors, he added.

“If I happened to be in the middle of a trade with NYSE, it would have been rejected, so I would have sent it to a different venue,” he said. “If it had lasted for hours and affected other exchanges, that would be a different issue. But that didn’t happen.”