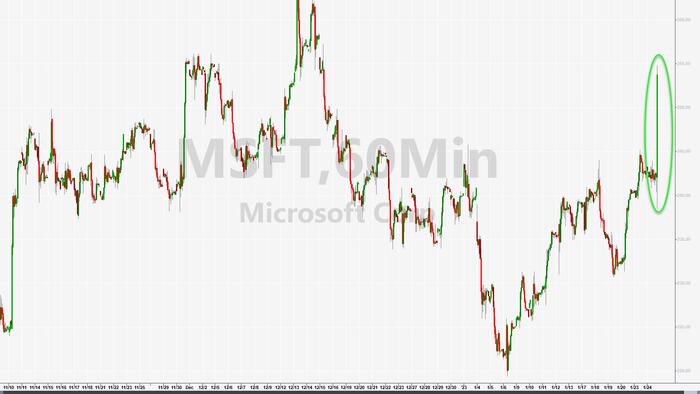 
With all eyes on super-tech bellwether Microsoft, and specifically on how the company’s Azure cloud division would do, not to mention what the company would say about its outlook, this is what the company reported moments ago:

Here, a mixed picture at best, and some more details

A snapshot of growth rates by various operating divisions shows just how extensive the impact of the strong dollar was across the board.

Commenting on the quarter, CEO Satya Nadella, said that “The next major wave of computing is being born, as the Microsoft Cloud turns the world’s most advanced AI models into a new computing platform. We are committed to helping our customers use our platforms and tools to do more with less today and innovate for the future in the new era of AI.”

“We are focused on operational excellence as we continue to invest to drive growth. Microsoft Cloud revenue was $27.1 billion, up 22% (up 29% in constant currency) year-over-year as our commercial offerings continue to drive value for our customers,” said Amy Hood, executive vice president and chief financial officer of Microsoft.

… it may have been just enough to ease market fears of the bottom falling out.

In kneejerk reaction, MSFT stock jumped more than 4% after hours…

… kicking off the closely-watched big-tech earnings season on an upbeat note. Peers such as AMZN were also up some 3% after hours.

That said, keep an eye out for forecasts and more during the firm’s conference call, due at 5:30pm NY time: a word out of place could promptly burst any bullish sentiment from the cloud beat.