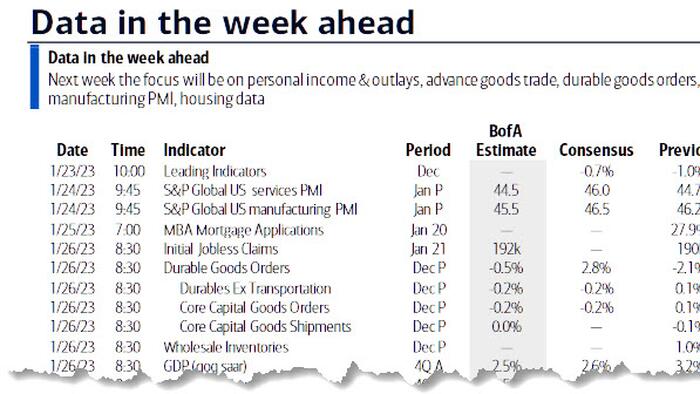 
As markets brace for next week’s FOMC meeting and the relative peace of the preceding Fed blackout, we’ll get the latest health check on global growth momentum this week amid releases of Q4 US GDP (Thursday) and global PMI numbers (tomorrow). US leading indicators today will also be of note as we are around levels only previously associated with recessions. In addition, PCE, personal spending (both Friday) and durable goods orders (Thursday) will also be released. Key central bank events will include the BoC decision, and Summary of Opinions and minutes from the BoJ’s shock December meeting (all Wednesday). In earnings, all eyes will be on Microsoft (tomorrow), Tesla and ASML (both Wednesday), among others.

As we noted earlier today, the Fed is now in the blackout period so the usual vol spikes around Fed speakers won’t be there this week. However, as DB’s Jim Reid notes in his Morning Reid note, there are quite a few growth signposts to engage markets. Let’s focus on some of the key upcoming events.

It’s not a top tier release but today’s US leading indicators (consensus -0.7% vs -1.0% last month and likely around -5.5% YoY) will likely remain at levels only previously associated with recessions. Last month the Conference Board, who publish this series, said the following: “Only stock prices contributed positively to the US LEI in November. Labor market, manufacturing, and housing indicators all weakened—reflecting serious headwinds to economic growth… The US LEI suggests the Federal Reserve’s monetary tightening cycle is curtailing aspects of economic activity, especially housing. As a result, we project a US recession is likely to start around the beginning of 2023 and last through mid-year.”

Reid says that this is interesting as he felt when he did his 2023 outlooks that he was the opposite way round to consensus. Reid expects a good start for risk assets this year but a very bad end to the year on his long-standing H2 23 recession call: “To be honest, the US data has generally been poorer than anticipated this year so far which is fascinating as markets are rallying hard”, he says.

Going down the list, we’ll also get a good read on global growth momentum with tomorrow’s global flash PMIs which will take into account China’s reopening and falling gas prices. Then we’ll see how growth was faring going into this year with Q4 US GDP on Thursday. Deutsche Bank economists expect +3.2% annualized (consensus +2.7%). They also expect +1.8% for Q1 with H2 being where the US recession hits. Consensus on Bloomberg is around 0% for Q1 so that’s a potential battle ground once actual hard data comes through.

Other notable data releases on Thursday include durable goods orders, new home sales, and the Chicago Fed national activity index. All will be closely watched for signs of weakness seen in the data so far this month.

Finally, Friday’s core PCE release will occupy the Fed’s minds on their blackout period ahead of next week’s FOMC. Most economists don’t expect the same declines as recently seen in CPI as some of the stronger components in PPI last week are better correlated to PCE components. Consensus expects a +0.3% monthly gain in the core PCE price index, up from 0.2% in November.

With that Fed blackout, ECB speakers will take center stage, especially today with Lagarde being the highlight. Dutch CB chief Knot continued his recent hawkish rhetoric over the weekend suggesting that “We made a step down in December from 75 to 50 basis points — that will be the pace for a multiple number of meetings… So that means at least the two in February and March.” So that will challenge the Euro rates bulls after the recent rally. We saw a big reversal from the yield lows (+20bps on 10yr Bunds) on Thursday (and into Friday) after Lagarde’s hawkish Davos commentary. Knot is also on the agenda again tomorrow. You’ll see the full list of speakers in the day-by-day week ahead at the end. Back across the pond, the BoC are expected to hike 25bps on Wednesday. A few weeks ago many were expecting a pause but a recent stretch of firm data has moved the consensus back in favour of a hike.

Over in Asia, key data releases for Japan will include the aforementioned PMIs and the Tokyo CPI (Thursday). Aside from the BoJ’s Summary of Opinions for the January meeting, the minutes of the December meeting will also be released and our economists highlight the importance of analysing how the decision to double the yield curve control range was reached. Elsewhere in the region, the Lunar holidays will curtail a lot of the week’s activity with many bourses shut until midweek with China shut all week.

In corporate earnings, Microsoft will kick off the reporting season for Big Tech tomorrow, with the rest of the group reporting next week. All eyes will be on Tesla post-market on Wednesday ahead of earnings from traditional automakers next week as investors try to grasp trends for EV demand. Other earnings highlights are in the calendar at the end.

Courtesy of DB, here is a day-by-day calendar of events

Finally, looking at just the US, Goldman writes that the key economic data releases this week are the S&P Global US manufacturing and services PMI reports on Tuesday, the durable goods and Q4 advance GDP reports on Thursday, and the core PCE inflation report on Friday. There are no major speaking engagements from Fed officials this week, reflecting the FOMC blackout period