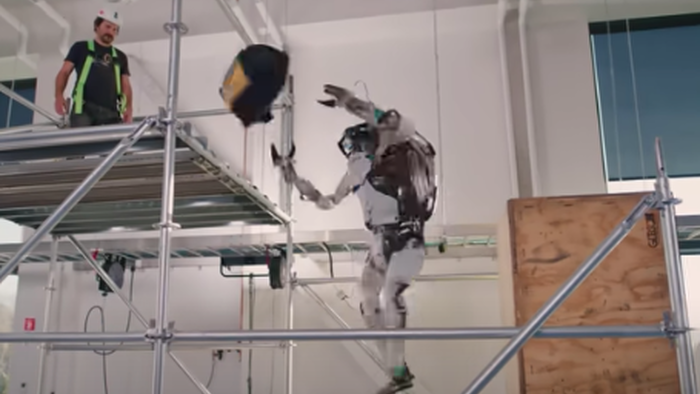 
Boston Dynamics’ latest video of its six-foot-tall bipedal humanoid, Atlas, shows it has acquired new skills that enable it to operate in complex terrain.

Boston Dynamics’ Atlas team, led by Scott Kuindersma, told The Verge that the video is “meant to communicate an expansion of the research we’re doing on Atlas.”

The video shows Atlas operating autonomously, working in a makeshift construction site. A worker asks the bipedal robot for his tool bag while high up on a scaffold. The robot retrieves the bag and successfully delivers the bag to the worker.

“We’re not just thinking about how to make the robot move dynamically through its environment, like we did in Parkour and Dance.

“Now, we’re starting to put Atlas to work and think about how the robot should be able to perceive and manipulate objects in its environment,” said Kuindersma.

Since Hyundai Motor Group acquired a controlling interest in Boston Dynamics for $1.1 billion in 2021, there’s been a notable change in messaging from the robotics company that appears to push these bipedal robots closer to commercialization for real-world applications.

What bothers us is the military-industrial complex’s dream of humanoid warfighters could be realized via Atlas.