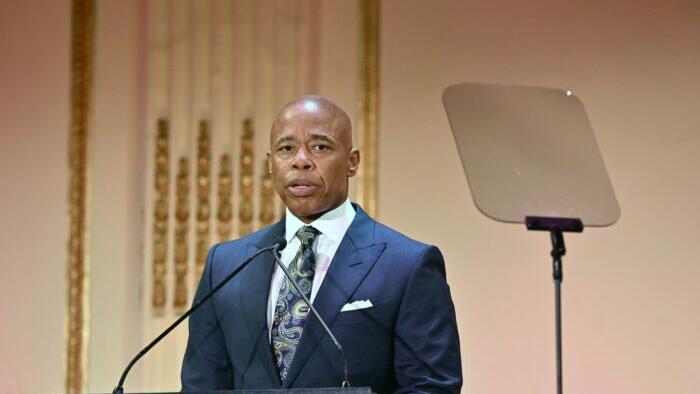 
Authored by Samantha Flom via The Epoch Times (emphasis ours),

New York Mayor Eric Adams has called for the appointment of a “national czar” to manage the immigration crisis at the U.S.–Mexico border, seemingly unaware that Vice President Kamala Harris already holds that role. “There must be a national czar,” Adams said at a Jan. 17 press conference held at New York City Hall.

“I think it should be done through FEMA [Federal Emergency Management Agency],” he added.

“We should treat this the same way we treat any major disaster or major crisis. That should be coordinating with the Border Patrol, coordinating with our cities, our states, to make sure that we as a country absorb this national issue.”

The Democratic mayor recently returned from a weekend tour of the Texan border city of El Paso, which he described on Jan. 17 as a “beautiful city” that’s been “overrun” by the recent surge of illegal immigrants crossing the border.

El Paso Mayor Oscar Leeser, also a Democrat, has declared a state of emergency in the city because of the overwhelming influx of illegal immigrants.

Leeser and Adams have been critical of the Biden administration’s approach to the situation, saying that not enough is being done at the federal level to ease the burden on cities and states.

Despite his previous assertions that there is “no room” in New York for additional illegal immigrants, Adams said on Jan. 17 that suspending the city’s self-professed sanctuary status as a deterrent is “not on the agenda at all.”

“I think of, as we celebrated the birth of Jesus, he was faced with a ‘no more room,’ but there was a place that was found,” he said. “And that’s what we are doing. We have no more room, but we are still finding spaces and accommodating. And we are going to continue to do that. That is our law, that is our obligation, and that is what’s morally right.”

In March 2021, President Joe Biden appointed Harris as the official “border czar” to lead the administration’s response to the growing crisis at the southern border. Every month since, U.S. Customs and Border Protection has recorded more than 150,000 encounters with noncitizens at the border, and for fiscal year 2022, encounters totaled more than 2.3 million—the highest number on record.

So far, Harris has made only one visit to the southern border as vice president. That trip took place in June 2021—after much public pressure—during which she visited a migrant processing center in Texas.

In October 2022, it was thought that Harris might visit the border again, while in Texas for a political fundraiser, but no such tour occurred.

“I don’t understand why the vice president just won’t take an hour plane ride to the border and just listen, talk to people, just show up and say, ‘Hey, we are here to help.’ Just say, ‘The administration hasn’t abandoned you’ … something!” Rep. Tony Gonzalez (R-Texas) said at the time.

Meanwhile, the president just took his first tour of the border on Jan. 8 in El Paso, where he met with border personnel, observed how they conduct their work, and visited the border wall and affected areas of the city.

“They need a lot of resources,” Biden said after surveying the situation. “We’re going to get it for them.”

Days prior to the visit, Biden announced new measures aimed at securing the border and slowing the flow of illegal immigration, including turning away Cubans, Haitians, and Nicaraguans who arrive illegally at the border, and rejecting illegal aliens who don’t seek asylum first in a country they traveled through en route to the United States. At the same time, up to 30,000 people per month from Cuba, Nicaragua, Haiti, and Venezuela who arrive in the country legally will be allowed to come to the United States for two years and be allowed to work, provided they have a sponsor and pass background checks.

For Texas Gov. Greg Abbott, the president’s visit was “$20 billion too late and two years too late,” according to the scathing letter (pdf) hand-delivered by the Republican to Biden upon his arrival.