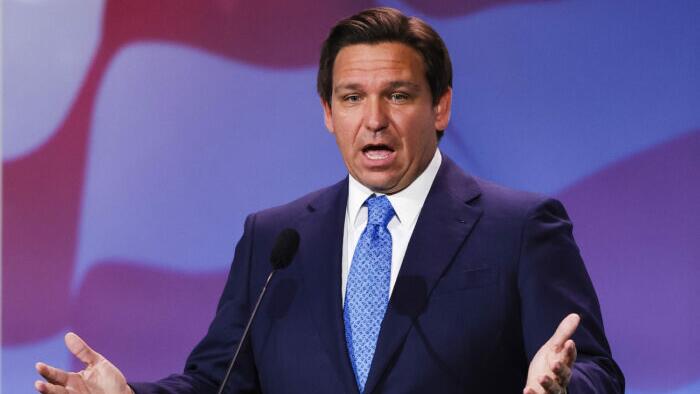 
Authored by Dan M. Berger via The Epoch Times (emphasis ours),

Speaking in Panama City Beach, DeSantis said he’d introduce legislation to carry that out in Florida’s upcoming legislative session. Earlier state-mandated measures were temporary and will expire on July 1, he said.

“We want to make sure our state remains the freest state in these United States,” DeSantis said.

The new legislation—likely to pass since Republicans control both houses of the legislature—will permanently prohibit COVID vaccine passports, COVID vaccine and mask mandates in schools, masking requirements in businesses, and employers hiring or firing based on COVID vaccination status.

It will further protect doctors’ First Amendment rights so that they won’t lose their jobs if they dissent from medical orthodoxy, and defend medical professionals from discrimination based on their religious views.

“When the world lost its mind, Florida was a refuge of sanity, serving strongly as freedom’s linchpin,” said DeSantis. “These measures will ensure Florida remains this way and will provide landmark protections for free speech for medical practitioners.”

He reminded the crowd that much of the conventional wisdom dispensed by the medical establishment had proven false over the past two years.

“All medical professionals should be encouraged to engage in scientific discourse without fearing for their livelihoods or their careers.”

DeSantis reiterated the actions he and Ladapo took early in the pandemic and decried the approaches taken in some other states and by the federal government.

He said that babies in Florida were never required to get vaccinated, and he credited Ladapo.

“There’s no evidence backing up the need or desirability to jab these kids. What he’s doing is he’s bucking the consensus, not a very well-founded consensus, but it is the consensus.

“Certainly, it’s what Big Pharma wants, and so that’s why a lot of our practitioners fell in line. But Joe Ladapo has been willing to stand up and say, ‘You know what, that’s not justified based on the evidence.‘”

Americans saw their medical institutions, at the federal and state level, act politically, DeSantis said. Florida has been attempting to follow the evidence, as scientists should.

“When you go away from evidence-based medicine, and you start embracing ideology, you start to do things that aren’t in the public’s interest,” DeSantis said.

“The physicians who were speaking out against some of these things, they were really treated very poorly.”

He said their freedom to speak and treat patients is now being highlighted again in controversies about sex-change operations in children.

“That is something that is supported by a lot of medical elites in the United States. It’s not supported by most of the European medical community because they’re not necessarily partisan in their outlook.”

Workplace protections are essential, DeSantis said. “No one should have to choose between a job they need and a shot they don’t want.”

He listed various areas where the protections come into play. Gym owners in Broward County were threatened with jail if they didn’t enforce mask mandates until the state stepped in.

The federal government has resumed efforts, in federal court in Miami, to require masking on commercial flights.

He said that not wearing a mask and being able to breathe fresh air should be deemed a civil right.

Following DeSantis and Ladapo onto the podium were Florida doctors who addressed the need for medical freedom, and two mothers who spoke about their families’ travails.

Dr. Tim Boyett said vaccine mandates were brought in because authorities originally believed the vaccines were safe and effective, that they would reduce transmission significantly, and because there was no effective outpatient early treatment protocol.

“Since then, evidence has amassed showing that none of these three presumptions is true,” Boyett, a radiologist in Gulf Breeze, said.

His practice has treated 160 acute COVID patients; none died, and only one was hospitalized. He had natural immunity, having already had the disease. He didn’t want the vaccine and applied for a religious exemption but could not get one.

Dr. Jon Ward, a Panama City dermatologist, said, “Social media is the new town square. And if you showed up to that town square and said masks don’t work, and they never in the history of medical science [have been] shown to stop the spread of a respiratory virus, you are put in lockup.

“If you wanted to say that young people are at very low risk from any ill effects from COVID, but new mRNA shots have real risks with serious complications, you are labeled a spreader of misinformation.”

Dedra Long, a surgical technician and mother of two who walked up to the podium with a cane, said she was debating whether to get the vaccine. Getting a new job ended her debate; the new position required it.

“My life changed with my second dose of Pfizer,” Long said. She suffered facial paralysis, body weakness, stuttering, and slurred speech. “My arms and legs began to jump and jerk and felt like they were on fire all the time.”

Long had extreme fatigue, tremors, and spasms, and couldn’t drive her children to school or go to their soccer games.

“I was basically bedridden at 36. I am now 14 months into this nightmare, and I still cannot do normal things like clean my house or go on a walk with my family. Instead of taking care of my children, they now help take care of me.

“And this is the worst punishment of all: Doctors still have no clue how to help. I face the real trauma of being gaslighted and dismissed with every new appointment. When I cry out for help online, I am silenced. I got the jab to keep my job, and I can no longer work.”

Lauren Phillips, a mother of four who said she’s expecting a fifth child, talked about her family’s trials involving school.