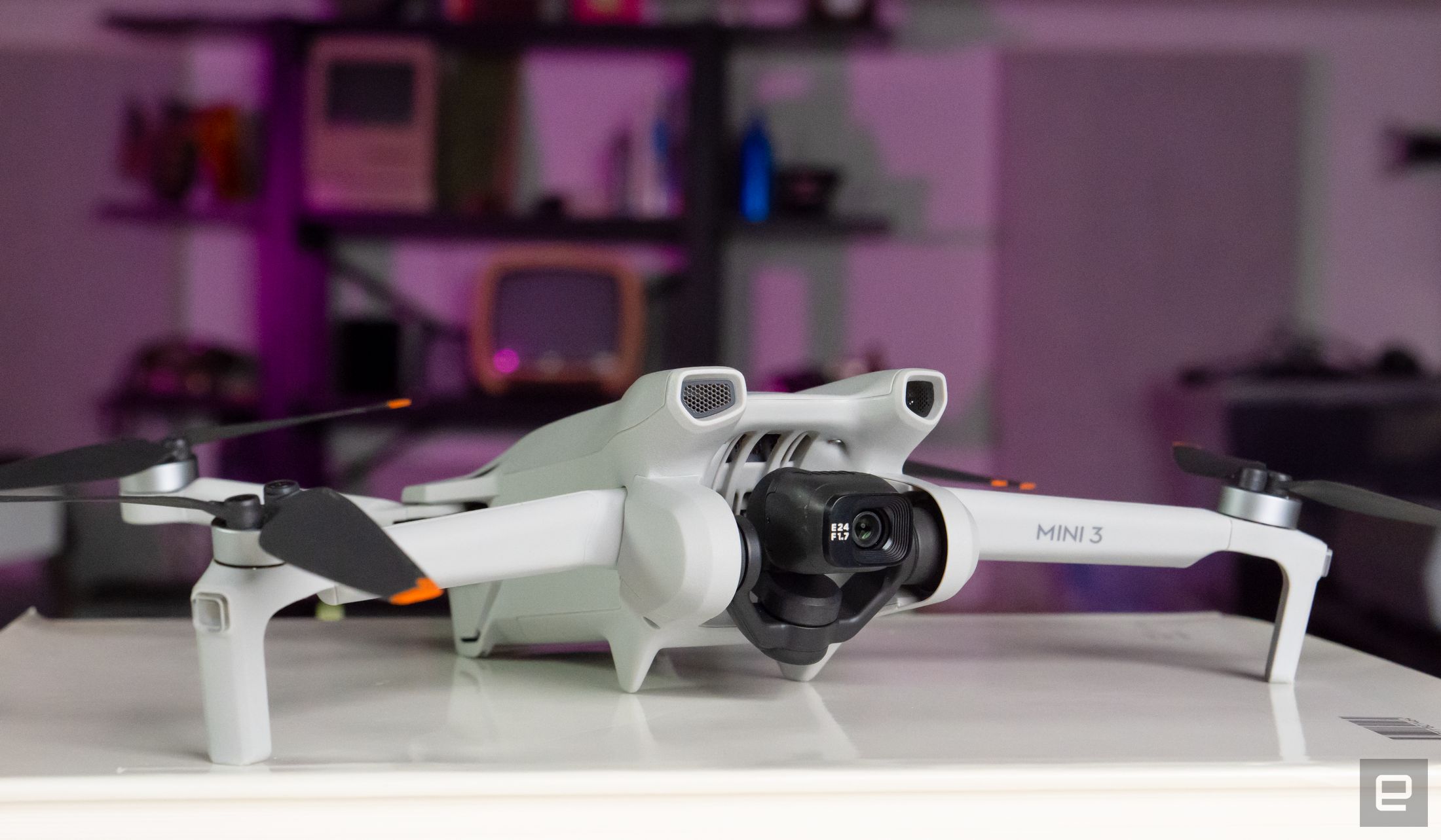 
You’d think that after launching a ton of products in 2022, DJI would be finished for the year. However, that isn’t quite the case, as it just announced the DJI Mini 3 drone aimed at the consumer market. It’s a stripped down version of the Mini 3 Pro, with no forward or rear obstacle detection, no ActiveTrack and video that’s limited to 4K 30p. Those compromises are reflected in the price, meaning you’ll pay $469 for just the drone compared to $669 for the Mini 3 Pro.

The company believes the Mini 3 Pro is ideal for first time users, in scenarios like “suburban outings, holiday travel, and urban shooting/exploration with family and friends.” In that sense, it’s more a spiritual successor to the DJI Mini 2 than a Mini 3 Pro-lite. That said, it’s nearly identical to the Mini 3 Pro, apart from the front sensors being removed and replaced with grills and smooth plastic where the rear sensors would be located on the Pro.

The Mini 3 weighs less than 249 grams so it doesn’t require a special permit to fly in many countries. It has the same Type 1/1.3 (9.6 x 7.2 mm) f/1.7 sensor as the Mini 3 Pro, so you can film in 4K HDR and take 12-megapixel photos. However, video is limited to 4K 30p, rather than 4K 60p on the more expensive model. It also offers “true vertical” video and photo shooting, with the camera flips 90 degrees to allow for high quality social media content.

DJI has ensured 2.7K and full HD captures max out at 60fps, so there’s no 120fps as found on the Mini 3 Pro. You can shoot HDR at up to 30fps, and it has dual native ISO for decent low-light performance in a relatively small sensor.

The Intelligent Flight Batteries provide long flight times, delivering up to 38 minutes with the standard and 51 minutes with the extended batteries (the latter are available in North America but not in Europe and other regions). Those times are under ideal conditions; you’ll more likely see around 30-32 minutes. Still, that’s excellent for this category and provides a cushion for beginners who may let the drone fly a bit too far away. Despite the small size it has “robust power,” DJI says, which helps it handle reasonably stiff winds as well.

As with the Mini 3 Pro, you can get the Mini 3 with DJI’s RC controller for an extra $230. That option is well worth it, because it’s far more convenient than using a smartphone with the regular RC-N1 controller. It has a similar layout to DJI’s other controllers, with the addition of photo and video triggers that automatically switch between those respective modes. The RC controller joysticks can be stowed underneath the controller chassis for travel and while the screen struggles a bit in bright sunlight, it is otherwise sharp and clear.

The Mini 3 has a key feature for social media users, namely DJI’s QuickShots. That lets you take short and cute videos without the need to pilot, as the drone does all the work. Some of those include “Dronie” (starting tight on the subject and flying up and away to reveal the background) and “Circle,” where the camera moves around the subject.

However, it lacks many of the AI features found on the Mini 3 Pro like ActiveTrack (following a subject), Timelapse and Mastershots. The fact that it can track a subject with QuickShots suggests that its capable of ActiveTrack, but that the functionality may simply be disabled.

It has other intelligent functions to help beginners. Those include Auto Takeoff, Return to Home (RTH) including Smart RTH, Low Battery RTH and Failsafe RTH, instructing the aircraft to return to its starting point if the battery is low or signal drops.