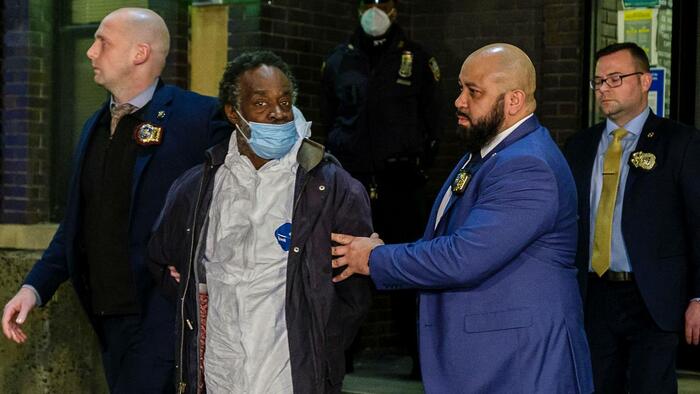 
Following a steady stream of vicious attacks perpetrated by New York City’s homeless, Mayor Eric Adams on Tuesday announced a new program that will involuntarily hospitalize people deemed a danger to themselves — regardless of whether they’ve demonstrated a risk to others.

A statement from the mayor’s office said the policy targets an “ongoing crisis of individuals experiencing severe mental illnesses left untreated and unsheltered in New York City’s streets and subways.” At least 26 people have been shoved from NYC subway platforms this year alone — though not all the attacks were perpetrated by homeless people.

“The very nature of their illnesses keeps them from realizing they need intervention and support,” said Adams at a City Hall press conference. “Without that intervention, they remain lost and isolated from society, tormented by delusions and disordered thinking. They cycle in and out of hospitals and jails.”

Of course, there’s more to New York’s crime crisis than “mental health” issues. An overly-forgiving judicial system that returns violent criminals to the streets after a scolding is also to blame — but rounding up some of the bona fide lunatics for treatment could be a good thing for all concerned.

According to the mayor’s office statement, Adams’ directive “seeks to dispel a persistent myth that the legal standard for involuntary intervention requires an ‘overt act’ demonstrating that the person is violent, suicidal, or engaging in outrageously dangerous behavior likely to result in imminent harm.”

Omg. Watch as the woman’s hair he is pulling mouths the words, “please help me..”
I can’t imagine the terror she was feeling as that maniac grabbed her hair. #subway #NYC
Please @NYCMayor build more mental hospitals and get these people off our streets! @77WABCradio pic.twitter.com/ZEbBRODKgB

“The common misunderstanding persists that we cannot provide involuntary assistance unless the person is violent,” said Adams. The new program empowers both cops and medical workers to assess people in public spaces and authorize involuntary hospitalizations.

Hospital capacities have been cited as a limiting factor, but, pointing to a commitment by Governor Kathy Hochul to add 50 new psychiatric beds, Adams said, “We are going to find a bed for everyone.” Maybe, but, in a city of 8.5 million people, 50 beds doesn’t exactly sound like a game-changer.

The new program is certain to invite legal challenges. Indeed, even the mayor’s policy directive to city agencies acknowledges that “case law does not provide extensive guidance regarding removals for mental health evaluations based on short interactions in the field.”

It points, however, to a few key indicators that police and other first responders might use to involuntarily take homeless people into custody and into care: “serious untreated physical injury, unawareness or delusional misapprehension of surroundings, or unawareness or delusional misapprehension of physical condition or health.”

The New York Civil Liberties Union’s Donna Lieberman was among the first to criticize the plan: “The Mayor is playing fast and loose with the legal rights of New Yorkers…The federal and state constitutions impose strict limits on the government’s ability to detain people experiencing mental illness — limits that the Mayor’s proposed expansion is likely to violate.”

In his Tuesday remarks, Adams assured reporters that people wouldn’t be committed merely “because someone’s sitting on the train talking to themselves.” Rather, an “accumulation of factors” would be used by a “trained professional determine that this person is a danger to themselves because they can’t take care of their basic needs.”

Next, Mayor Adams needs a plan to address scenarios where serial killers transfer their souls into dolls so they can attack unsuspecting people on the subway: