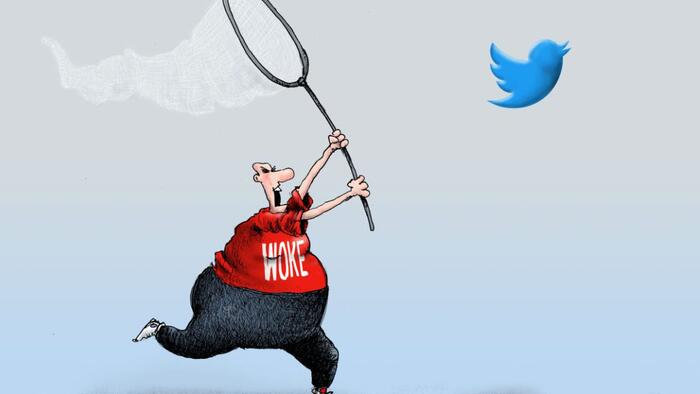 
Authored by Randolph May via RealClearMarfkets.com,

The Babylon Bee, the satirical website that takes aim – all too effectively in the minds of some – at over-the-top wokeness, has been reinstated on Twitter. A blaring headline from a recent Bee story: “‘Twitter Is Dead,’ 300 Million People Post on Twitter.” A satirical zinger, indeed!

Amidst the turmoil and tumult of Elon Musk’s Twitter take-over, predicting what Twitter will be next week, much less next year, is a fool’s game. Count me out. After all, Mr. Musk reportedly has warned the staff: “Bankruptcy isn’t out of the question.”

Assuming for present purposes that Twitter can ensure the security and stability of the platform going forward, I know what I want the platform to be. Throughout this now fifteen part “Thinking Clearly About Speaking Freely” series, I’ve argued that Twitter, along with other major social media platforms, have been far too censorious in restricting content that should remain subject to public debate. And throughout, I’ve cited examples of overly censorious actions, such as restricting posts relating to the origin of COVID-19, the effectiveness of various treatment options, and the educational and economic costs of school and business lockdowns.

I’ve never contended there shouldn’t be any content moderation at all, but rather that Twitter should operate much more like the digital town square that Elon Musk, as a self-proclaimed “free speech absolutist,” long has said he wanted.

In other words, censorship should be considerably more limited, say, to posts demonstrably facilitating terrorism or sex trafficking, or inciting violence.

Perhaps it should not be surprising that amidst all the present chaos, including the substantial downsizing of staff, including those on the “Trust and Safety Team,” that there are more strident calls for the government to exert greater control over Twitter. By way of example, I want to focus on a November 16 letter from the left-leaning Open Markets Institute (“OMI”) to the heads of the Federal Trade Commission and the Department of Justice’s Antitrust Division. Along with asking these government officials to investigate Mr. Musk’s take-over, OMI proposes to subject Twitter to stringent government control.

Claiming that Twitter is an “essential communications platform,” OMI says that “Twitter long ago proved it serves a unique and irreplaceable role in enabling citizens to communicate and debate key issues of the day.” It contends Twitter’s status as a “utility” is clear.

With Twitter denominated a public utility, it’s not a far leap for OMI to beseech government officials to protect “all communications and political debates” on Twitter from interference by Twitter’s executives, Board members, or employees. And according to OMI, Twitter should be required to enforce its terms of service “without prejudice or discrimination, in a completely transparent manner.”

If taken literally, OMI is asking that Twitter be regulated in the same “common carrier-like” way that the conservative Texas legislature required when it enacted a law mandating that Twitter and other social media platforms not discriminate in their content moderation practices on the basis of “viewpoint.” And that Justice Clarence Thomas suggested might be appropriate two years ago in his concurring opinion in Biden v. Knight First Amendment Institute of Columbia University. There, Justice Thomas took note of what he characterized as the dominant market positions of Twitter, Facebook, and Google, along with the fact that the latter two essentially are controlled by one or two persons. Of course, that’s now true of Twitter too, and it is this concentration of control in one person upon which OMI primarily bases its case for government regulation.

As I pointed out in Part 2 of this series, in his Knight First Amendment Institute opinion, Justice Thomas declared there is a “fair argument” that Twitter, Google, and Facebook could be deemed common carriers, including by laws enacted in the states, so that they would be prohibited from excluding lawful speech from their platforms. And he speculated that the Supreme Court soon would have “no choice but to address how our legal doctrines apply to highly concentrated, privately owned information infrastructure such as digital platforms.”

If enough of his fellow justices agree, as widely suspected, to review the Fifth Circuit’s NetChoice, L.L.C. v. Paxton decision upholding the Texas law mandating that Twitter and other major social media platforms operate like common carriers, then Justice Thomas’s predilection for imposing common carriage obligations on the major platforms might prevail.

Given the excessive censorship in which Twitter and the other dominant social media platforms have engaged, I have considerable sympathy for the impulse motivating calls for common carrier-like regulation of the platforms. But as I said in Part 2, and elsewhere in this series, I have serious concerns about this supposed remedy.

Here’s the nub of the matter as I explained in Part 3:

“As traditionally applied, the core elements of common carriage – rate regulation and nondiscrimination mandates – stifle investment and innovation. And, in any event, the traditional criteria used to assess whether an entity is a common carrier don’t neatly fit the web platforms, or at least not all of them.”

So, rather than embracing the call by the Open Markets Institute, and presumably Justice Thomas too, for imposing common carrier-like control over the platforms’ censorship practices, I continue to prefer offering free market solutions to address my concerns. Previously, I’ve advocated that Twitter and other platforms incorporate explicit presumptions favoring free speech in their terms of service. This presumptive “free speech default” would provide that content will not be removed absent clear and convincing evidence that the speech violates some specific, clearly delineated content prohibition. Such a presumption may be embedded in Mr. Musk’s mind, but it also should be embedded in the terms of service so that it more readily becomes part of the corporate culture.

I’ve also urged Twitter and other sites to adopt additional consumer empowerment approaches that put tools in the hands of platform users to determine the parameters of the content they wish to access. If consumers are allowed to avail themselves of such “personalization” tools, they would be able to assume, to a much greater extent than at present, the content moderation function now performed by the platforms.

Rather than looking first to imposing common carrier-like or other government controls, it is preferable to look to free market approaches to address the problem of excessive censorship.

I wouldn’t necessarily bet my house on it, but Elon Musk, with his entrepreneurial bent, may just be able to succeed at making Twitter much more free speech-friendly, while at the same time avoiding what he has described as the “hellscape.”