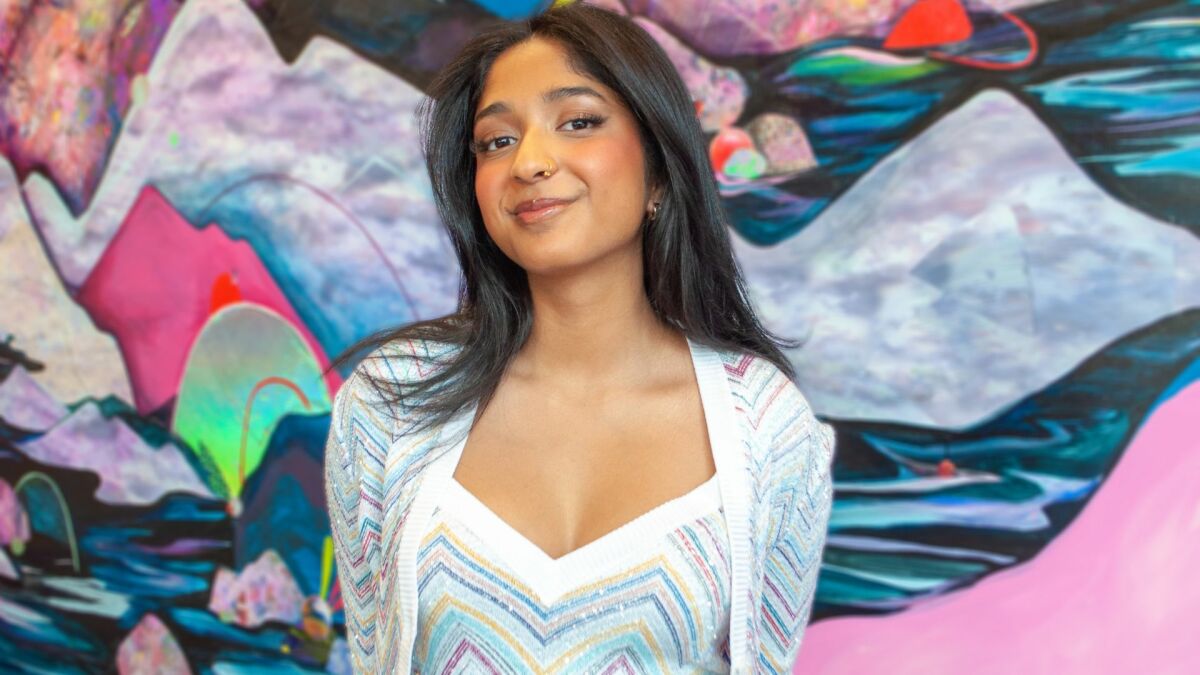 
It’s unlikely, if you peruse Instagram or Netflix with any sort of regularity, that you haven’t come across Maitreyi Ramakrishnan in the past few years.

The breakout star of Mindy Kaling’s teen comedy Never Have I Ever, Ramakrishnan has become a Gen-Z icon, an inspiration for young South Asians, and a distinctive on-screen talent. The 20-year-old was famously selected to play protagonist Devi Vishwakumar out of 15,000 audition tapes. Her stardom has only flourished since.

This is no more evident than on Ramakrishnan’s social media platforms, where countless followers engage with the young actor. On Instagram, she boasts 4.1 million of these fans, who observe her burgeoning career, her affinity for cosplay, and her activism. It’s here that she has also connected with fellow creatives, such as Anu Chouhan, a Tamil artist who once created a piece inspired by Ramakrishnan’s NHIE character. The two ended up meeting in person over bubble tea, after the actor came across the fan art on Instagram.

‘Never Have I Ever’ review: Season 3 grows up with extreme focus on romance

It’s this story that Ramakrishnan shares as she launches the #ExtraordinaryConnections campaign, in partnership with Upworthy, a platform dedicated to positive storytelling, and Meta. The campaign is inviting people, globally, to convey similar stories of connection through Instagram and other Meta apps.

Ramakrishnan’s online persona, which is largely affirming and joyous, lends itself naturally to the campaign, which is hoping to amplify the more socially-conscious, community-based aspect to social media. Here, Ramakrishnan speaks to Mashable about her own relationship to the internet and how she fostered a healthy relationship with being online. Plus, she delves into what she imagines Devi’s Instagram would look like (hint: a lot of thirst traps).

Meera Navlakha: The first season of Never Have I Ever came out at the beginning of the pandemic, and so much of the reaction unfolded on social media. What was that experience like?

Maitreyi Ramakrishnan: It was a lot. It was a very interesting experience, because we didn’t get the red carpet, or the premiere or that fancy moment. So at first, it sort of felt like this small little thing. You can’t imagine that millions of likes and comments are millions of people. Around Season 2 is when I finally got to understand that this is really big.

The power of social media helped push Never Have I Ever to so many audiences, especially internationally. The reach that Instagram has for international audiences is so awesome. It was a double-edged sword because it was at first underwhelming. But I really appreciate how we got to get the show out there and how many people posted about it. The amount of Netflix watch parties as well that I did on social media — I crashed so many people’s watch parties after they sent me the link on Instagram. That was so fun.

Did your social media use change a lot after Never Have I Ever?

Yeah, definitely. Before, it was just truly me and my friends. My social media feed was probably just, you know, pictures of family or myself, birthday parties, and my dog. Now that I say this, it’s still pretty similar. But I just think I get to use social media in a more interactive way, if that makes sense. There’s more conversation.

You’ve become a known role model for so many young South Asians. Have you been able to connect to some of these fans over social media?

Oh, yeah, for sure. That happens with good old comments and whatnot, but also with using the “question stickers”, or even Instagram Lives. I like to do a good old Instagram Live, because you can see: what are people saying? What photos are they tagging you in?

You also see the fan art and the fan edits, and you just get to see how people get very hyped about the show. What I love is when a trailer drops, and then people try to analyze the trailer and make their theories. But then they also get to interact with your personal life [on Instagram] in a way that makes sense to you. I feel like with social media, you can control how much of your personal life you put out there. You can invite people into the aspects that you want them to be in versus just ‘hey everyone, just come on in’.

And have you been able to connect to other creatives and artists?

Yes! Before Never Have I Ever, I really wanted to get into digital art and animation. I found so many cool visual artists through Instagram, and that’s how I was inspired by their art. Then eventually, I actually got to talk to them myself after [the show]. And with actors and other people in the creative field, I’ve branched out the more I’ve gotten into the industry. I get to stay connected with new people and see what creative adventures they’re going on.

OK, obviously Upworthy, because they just have nice, wholesome, happy stuff. It’s nice to have happy stuff on your feed. It always sucks when you have the first thing on your feed just to be really dark or something. You can never get enough of the positives on social media. But I gotta say, I also just like following my friends and the people I actually know.

Have you ever found it hard to be your authentic self on social media? That’s something so many of us struggle with.

Oh, yeah. You gotta find your voice or, more so, find your balance. I feel like everyone has their own limit and their own vibe of what works for them. Some people really like to be on social media all the time, and they want to give so much of themselves on social media. It goes back to our conversation about how much of your personal life you want to put out there. For others, they really don’t want to. Like with a lot of Instagram artists and digital artists — they barely ever post a picture of themselves. It’s mainly just their artwork, and that’s totally valid. So it’s about finding your own individual balance.

“I feel like everyone has their own limit and their own vibe of what works for them.”

I definitely had to find that for myself too, and understand when I need to take breaks and sometimes say ‘I don’t need a post about it’, or ‘I’m hopping off social media for a while, I’ll see you later.’ Some people can do that. it’s  just knowing how to take those breaks, whether or not you announce it or not. And you get to make your Instagram your own — mine is predominantly still my family and pictures of fun times.

You’ve posted about having a seemingly “complicated” name and the importance of pronouncing people’s names correctly. Can you tell me about having that conversation over social media and why you chose to do so?

I’m really blessed to have the platform that I do, with the reach that I do. I know many people would want that platform and have the opportunity to speak up about things like talking about the importance of saying someone’s name right and the identity that comes with a name. That’s something that really resonates with me, it’s something that I’m genuinely passionate about, and I genuinely believe in. So, having that conversation is definitely authentic to my social media persona.

I think when you care about something, there’s definitely other people out there that have to care about it as well. There’s got to be. That’s the thing about social media, too, right? You get to put out things that you care about, and there’s a pretty good chance other people out there will resonate with it and then feel a sense of connection — and feel seen. A lot of people saw me speak about my name and they felt validated if they had a complicated name, and could relate to this.

Oh my god! It’d probably be a lot of TikTok dances that suck. Lots of those reels and TikToks, mainly dances. There would definitely be a lot of trends and lip syncing audios. She’d also post thirst traps, and honestly, power to her. I would follow her. It would be pretty funny.

How do you think young people overall can foster more healthy connections on social media?

A big part of it all is staying safe online. Like, let’s not over-romanticize the connections that can be made. You gotta still stay safe and stay smart. I think the biggest thing that I feel about creating healthy connections on social media and having a healthy relationship with social media is understanding what’s fake and what’s not. At the end of the day, there is life beyond and you have to always stay in touch with that.

If I got hell bent on every single like and every single post that I put out, worrying about things like ‘Oh, are people gonna like it? Or people gonna think this is weird?’ — then I’m losing myself. Some of my favorite posts are just me at a Raptors game with my hot dog. That’s Maitreyi at her core. I love hot dogs. I had like, three. Then there’s me at concerts or at the Nintendo store. That’s me at my core. That’s not me posting and thinking ‘hopefully, everyone else will really like this.’ It’s just me thinking: this is my cool hobby and I was really happy in this photo. Hopefully, people resonate with happiness. I still get in touch with myself and what I like, and put that out there.

Have you ever gotten any really good advice from any of your mentors or other actors about social media?

I feel like I know a lot of actors that tend to just stay away in general. In all honesty, that actually validated me when I did feel like things were getting overwhelming, because sometimes it really does. Sometimes social media does get really overwhelming, especially when a season drops. Sometimes, all the attention and all the notifications are flooding in can be a little overwhelming. Before, I was like, I can handle it. But then, when I hear from others that they take breaks and shut off their phones and mute those notifications completely, I realize I can totally do that as well. You can still like social media. I still do — I love social media. I just recently posted a fun edited video of Darren [Barnet] and I, because that’s the kind of stuff I love putting that out there. I do what’s good for me. That’s what I’ve learned.

What is your advice on maintaining self love like while being an Extremely Online person?

Hmm. I think it’s about checking in with yourself. Do what you feel comfortable with. Easier said than done. There’s a lot of pressures from all different corners of our lives that make us want to bend to what other people want. Do you think this is cool. I would say in general, I wish people on social media were just more honest. We watch other people’s feeds and see the fun and the perfection. But there’s so much behind the scenes that we don’t know. We all put up this front and want validation. It ends up with all of us comparing ourselves. We need to be more honest and be self validating.

Thank you so much for speaking with me!

Of course! I hope all that made sense, because social media is a tricky thing. It’s super complicated. We’re all just trying to make as much sense of it as we can.