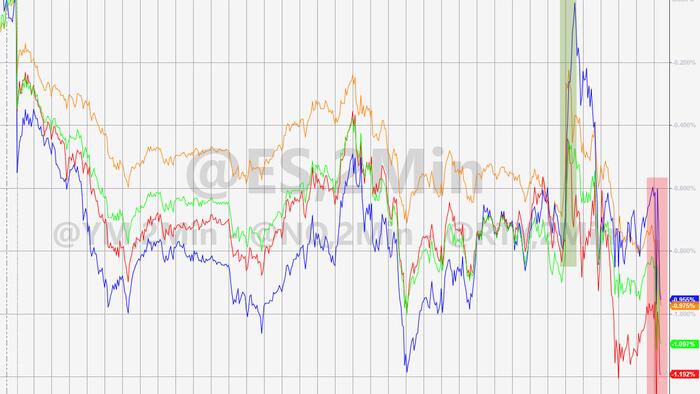 
After weakness overnight on the back of China lockdown chaos, an initial buying panic appeared at the cash open. US equities leaked lower after that initial surge but it was St.Louis Fed’s Jim Bullard that provided the ammo for an acceleration in the leg lower…saying that financial markets are underestimating the chances that policymakers will need to be more aggressive next year in raising interest rates to curb inflation.

“There is still a heavy degree” of expectations that inflation will go away naturally, Bullard said Monday in a webcast interview with MarketWatch and Barron’s.

Bullard on Monday reiterated his view that the Fed needs to at least reach the bottom of the 5% to 7% range to meet policymakers’ goal of being restrictive enough to stamp out inflation near a four-decade high.

The Fed “has a ways to go to get to” restrictive rates, adding that markets are underestimating the risk that the FOMC will be more aggressive and will have to go higher on rates in 2023.

In one noteworthy comment, coming on the heels of former NYFed President Bill Dudley’s aggressive pushback against chatter of The Fed raising its inflation forecast:

“For the sake of the economy and its own credibility, I hope the Fed doesn’t listen.”

Bullard responded to a question by warning that The Fed abandoning 2% inflation target would be “a completely terrible idea for this environment”.

Additionally, Bullard said “so far so good” on The Fed’s QT, noting that it “was time to let it run for now.”

The reaction was swift and to the downside in stocks…

As a reminder, Bullard is a non-voter next year…