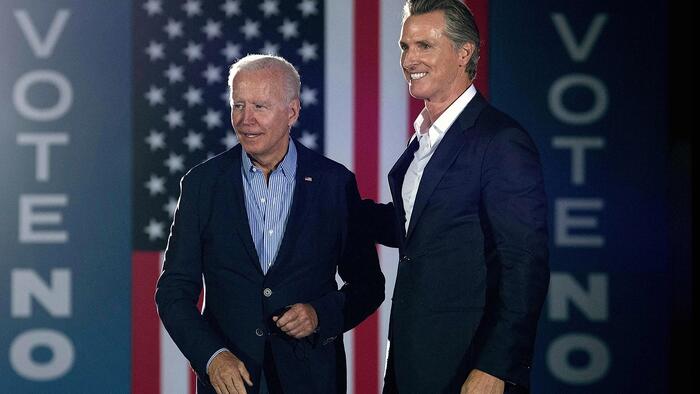 
California Governor Gavin Newsom (D) will not challenge President Biden for the Democratic nomination in 2024, should Biden seek reelection.

“I’ve told everyone in the White House, from the chief of staff to the first lady,” Newsom told Politico‘s Jonathan Martin on election night (which means they sat on the story for three weeks, why?)

His message to Ron Klain and Jill Biden over the summer — when he visited Washington amid growing speculation, and considerable West Wing irritation, that he was plotting a primary challenge — was to count him as a firm supporter of Biden’s reelection: “I’m all in, count me in,” he said he told them.

Newsom relayed the same to Biden himself on election night. –Politico

“I’m all in; put me in coach,” Newsom told Biden on election night, adding “We have your back.”

Kamala exits. Gavin gets tapped for VP. Joe resigns for “health reasons” or because Hunter gets indicted and Joe is implicated. Gavin ascends to POTUS.

Or he just hangs out as VP till 2024 and Joe decides not to run again.

As Bloomberg notes, “While Biden has strong support within his party, his age — he turned 80 on Nov. 20 — has fueled questions about whether he will seek a second term. That question has put Democrats on alert for anyone positioning to challenge Biden or run to succeed him if he bows out. Newsom said he wouldn’t run for president in 2024 even if Biden doesn’t.“

Newsom, 55, is the highest profile Democratic governor in the country – who many imagine will someday go toe-to-toe with Florida Governor Ron DeSantis for the presidency, whether it be in 2024 or 2029.