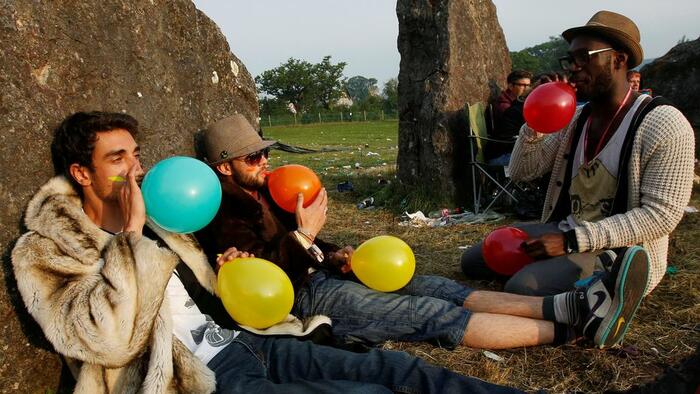 “There is a general perception among users that inhalation of nitrous oxide is safe,” says the European Monitoring Centre for Drugs and Drug Addiction (EMCDDA). “Yet we see that more frequent or heavier use of the gas increases the risk of serious harms.”

In addition to industrial uses, the gas is used as a sedative in medical and dental procedures, and as a propellant in whipped cream canisters. Classified as a depressant, it’s typically consumed by inhaling it from party balloons, and is frequently used in tandem with drugs like ketamine or MDMA.

Inhaling it can foster a sense of euphoria, relaxation and dissociation from reality. In most places, anyone can legally buy it at a convenience store, supermarket or online — and cheaply.

“A profitable and expanding supply chain has developed, with specialised internet stores directly promoting the gas for its recreational use or offering it under the guise of its use to make whipped cream,” says the EMCDDA.

Commonly called “hippy crack” or “nos,” it’s become a common fixture at music festivals. According to Reuters, concerns started mounting in 2017 with the introduction of larger canisters that deliberately targeted recreational users. In the UK, nitrous oxide is now the second-most-used drug among 16- to 24-year-olds.

The popularity of the gas is elevated by the ease with which it’s consumed and shared — usually by filling party balloons with the gas. Some users cut out that middle step, and suck it straight from the canister — risking lung injuries and cold burns.

“This stuff is dangerous. Seven years ago, this was a neurological rarity, even a couple of years ago I was seeing cases maybe once a month, now I’m seeing them every week,” said Dr David Nicholl, a UK neurologist.

The EMCDDA says the number of poisonings is still “relatively small in number,” but increasing sharply:

The UK Daily Mail this week shared some laughing gas horror stories: A teen with a ruptured lung, a woman with a damaged spinal cord now partially paralyzed and forced into a wheelchair.

A road safety group says the gas contributed to 1,800 vehicle accidents in the Netherlands alone in the past three years. In January, the Dutch government will institute a ban on the purchase, sale or possession of the gas, with exceptions for its continued use in medicine and in food packaging.

Bans and limitations are under consideration in the UK and elsewhere. The EMCDDA cautions that “any response measure needs to consider the widespread legitimate uses of nitrous oxide by industry, healthcare and consumers.”