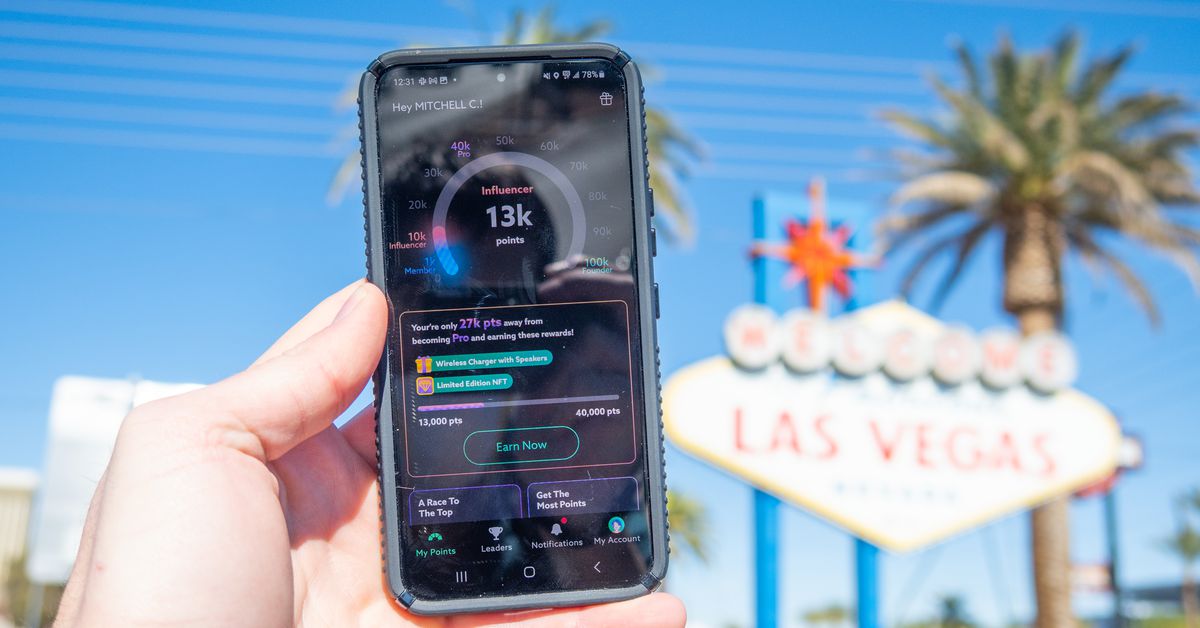 The moment I’ve been waiting the past few months to experience finally came on a bus ride down the Las Vegas strip.

I’d been testing Dish’s new 5G network — the one meant to turn the company into the US’s fourth major wireless carrier — with very middling results. But those tests were in Spokane, Washington; now I was finally in the city where it all started and where the network was the most mature. And in that moment on the bus, I had found what I’d been sent to Vegas to look for: proof that Dish’s service may actually be competitive someday, in the form of a speed test showing downloads coming in at 236 Mbps, with a respectable 41-millisecond ping.

I excitedly typed out a message to my coworkers on Slack: “Y’all. I have finally found the cloud 5G,” proudly displaying a screenshot of my speed test result, like a parent who discovered that their child can actually do art.

I didn’t get to find out how they responded because as the bus passed by Guy Fieri’s Vegas Kitchen and Bar, my internet completely stopped working.

I’m worried I won’t be able to fully capture my disappointment in that moment, but if I’m going to have a shot at it, we need to back up a bit.

Project Genesis, the cell network I’ve been testing, is basically Dish’s testing ground for the nationwide cell network it’s legally required to build out thanks to T-Mobile’s 2020 merger with Sprint. As part of that merger, Dish bought Boost Mobile and access to some spectrum that T-Mobile received as part of the deal, and it agreed to build out a nationwide wireless network to ensure the market had competition. In June, Project Genesis went live in over 120 cities after about a year of testing and building out the network in Las Vegas.

Genesis is available in an… odd mix of places, with Spokane, Washington, being one of them. Because I just happen to live there, I’ve been assigned to cover it and occasionally check in to see how the service is doing — and so far, the results have been pretty disappointing. The network still feels like a beta without providing any sort of mind-blowing performance to compensate for the hiccups.

All of those impressions, though, are based on my experience with it in Spokane. But — and I promise I say this with love — almost everything here is just a liiiittle worse than it is elsewhere. (Don’t @ me unless you want to hear a long-winded rant about our lack of museums, the difficulty of reloading my bus card, or local ecopolitics.)

I’ve always thought that maybe the real benefits of what Dish describes as “the nation’s first cloud-native Smart 5G network” might be obvious elsewhere, especially in Las Vegas, where it’s theoretically at its most mature. There are over a hundred Dish towers in Vegas, compared to around 15 in Spokane, according to crowdsourced CellMapper data. (Though, as far as I can tell, I’m literally the only person in Spokane contributing to the map, so it’s possible there are a few more than that). In theory, that should mean way more coverage, better speeds, and all the other benefits that come with just having a network that’s significantly more developed.

Is the idea of Vegas as a Genesis utopia just totally in my head? Maybe a bit. I’ve heard from a few individuals that they’ve had really good experiences there, and Vegas continues to be Dish’s testbed for new technologies. That includes the experimental 5G voice tech — known as VoNR — that’s meant to be a next-gen version of Voice Over LTE, and the deployment of a cellular spectrum band, n66, that it doesn’t currently appear to be using anywhere else, according to CellMapper. Band 66 aggregates other pieces of spectrum that Dish owns, which the company says should lead to “increased data throughput.”

But Dish has never outright pitched Vegas as a showcase for its tech. So it was fully in jest that I showed my co-workers a Reddit comment talking about how the network was more polished in Vegas and said that my next check-in would have to involve a trip to Nevada. “There’s just no other way,” I typed, smiling to myself at my little joke.

And then my boss actually took me seriously.

This is how I found myself sitting at the Las Vegas airport, trying to work off my Genesis phone’s hotspot and fighting the urge to panic because it was just starting to hit me that I’d signed up to cover my first in-person announcement and had no idea what I was doing. The sluggish performance of the hotspot on my phone — a Galaxy S22, one of only two phones that Dish currently supports — wasn’t helping matters much, either. Webpages would take forever to load, and Slack wouldn’t work at all for some reason.

“This is fine,” I thought. Because I hadn’t actually looked at a map, I figured the airport was relatively far from the city center where all the towers would be (fact check: it is basically right on the strip), and 5G tends to suck around airports anyways for surprisingly interesting reasons. “Things will get better when I actually get into Vegas proper,” I told myself.

And they did! On the bus ride to my hotel, my phone was perfectly useable, letting me send pictures with (allegedly) clever captions to my colleagues, friends, and wife, because I evidently hadn’t properly learned the dangers of jest. And for the next day or so, there was pretty much nothing noteworthy to say about my phone; I didn’t think about it — it just worked like you’d expect a phone to work.

Download speeds were generally in the range of 20–40 Mbps, and my service only cut out once when I got into an elevator — something I’d expect from my personal phone on Verizon’s network, too. Sure, that kind of performance wasn’t blowing me away, but if the future is quietly competent tech, I think I can live with that.

I can’t speak to how Dish’s new voice technology is going, though, because I had the wrong phone — despite owning one of only two that the carrier supports (and the only phone that was available when signing up for the service with a Spokane address). The only phone that can use Dish’s VoNR tech is Motorola’s Edge Plus, according to Meredith Diers, a spokesperson for the company. Other phone calls in Vegas go through Dish’s “partner network,” meaning AT&T or T-Mobile.

My blissful boredom with Project Genesis: Vegas Edition came to an end that evening during a long wait for a late bus near the Medical District. I was going through my very healthy nightly routine of jumping between Reddit — to find funny or cute cat pictures to send to my wife — and Twitter — to read about how Twitter is absolutely falling apart — when suddenly my data slowed to a crawl.

At first, comments wouldn’t load. Then pictures. And then I stopped being able to send messages. What I’m trying to say is that my phone almost completely stopped working, though, somehow, Google Maps managed to hang on. Finally, my bus arrived and started shuttling me and maybe one or two other people toward our destinations.

Mere mortals were not meant to endure nighttime public transit journeys without having any sort of distraction, especially after a very long day of writing about graphics cards. I stared out the window at the passing moonlit suburbs, reflecting on what exactly I was doing. Why had I thought the experience of using this cell network in Vegas would be better than at home? Why did I volunteer to report out two separate stories on one trip? Is anyone else experiencing the same creeping sense of frustration at buggy, pushy, over-hyped tech as I am?

Dish committed the greatest sin: leaving me alone with my thoughts

I wanted nothing more than to put on Kings of Leon’s “Cold Desert” to fully fulfill the vibe, but my Project Genesis phone couldn’t handle music streaming. Also, my cat had chomped my headphone cables before I left.

Thankfully, just as I was on the brink of actually starting to process my emotions in a healthy manner, my phone buzzed to notify me that a few Telegram messages had come through. I was back Online, baby, and could once again bury my thoughts in petty drama. I also noticed that Google Maps showed a Denny’s near my destination, which led to me further dulling my last functioning brain cell into submission with a massive sugar rush brought on by some crepes. For the moment, I forgot all about my burden of trying to make sense of a nascent 5G network.

The next day, it was time to leave Vegas, which brings us back to the double-decker tourist bus on the strip. Instead of staring out the window to squint at the Eiffel Tower replica through a see-through advertisement graphic, I poked at my phone, trying to get the service it had completely given up on back. I even busted out the advanced troubleshooting skills I’ve built up by years of tech support… and by that, I mean I toggled airplane mode and then, when that didn’t work, restarted the phone.

Both steps have been successful the few times this sort of network drop-off has happened at home, but they failed me that day. I grudgingly dug my daily driver iPhone (which also runs on a slightly unstable cloud-based network) out of my backpack so I could make sure I didn’t miss my stop.

It’s not that I expect perfection from Dish’s network, especially this early into its lifespan. Sure, the company is marketing it as “first of its kind” and innovative, promising that it “changes the way we connect,” but what carrier hasn’t made eye-roll-worthy claims about its 5G? At the end of the day, Dish really only needs its network to do two things: cover enough people that the FCC doesn’t sue it and suck at around the same rate as AT&T, Verizon, and T-Mobile.

And honestly, it gets surprisingly close to an acceptable level of suckage! When everything is working fine, it really is a similar experience to using my normal phone. But then, every so often, the bottom will fall out, and I’m reminded that my service is powered by a company that just met its first FCC deadline and is considering selling off the brand it said it’d use to widely market this network. And when that happened not once but twice to me in the city where the network really started, I finally got the message that I couldn’t buy into the hype.

By the time we reached the “Welcome to Vegas” sign, my phone had figured its life out and was back online. But it was too late; my dream was thoroughly shattered, and not even Creed’s “My Sacrifice,” which was inexplicably blasting as tourists lined up to take their pictures at the entrance to the city, could lift my spirits. At least it managed to get me back to the airport so I could fly home and continue to have pretty much the same cellular experience.