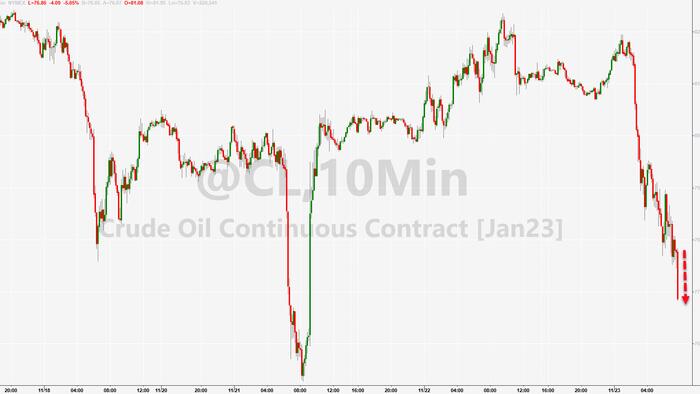 
Oil prices are tumbling this morning amid Europe’s Russian Oil Price Cap scheme discussions about a price cap between $65 and $70 and rapidly spreading lockdowns across China impacting demand.

“It will be crucial to see the details of the proposed cap to evaluate the price impact.”

Beijing asked residents not to leave the city unless necessary, to stem the spread of the virus.

While the crude draw was bigger than expected (and smaller than API), the surge in product stocks is perhaps more worrisome from a demand perspective…

With the Midterms behind them, the Biden admin drew only 1.6mm barrels (the smallest draw since February) from the SPR (now at the lowest level since March 1984)…

Crude imports from Saudi Arabia jumped to their highest since June. Inflows from Iraq were also up, recouping most of the previous week’s loss and pushing total imports from the Middle East back above 1 million barrels a day.

WTI was sliding to around $77.50 ahead of the official data and dropped to a $76 handle after the big product builds…

As the oil market has softened in recent days, both Brent and WTI have at times traded in a bearish contango structure for the first time in months.

Finally, Bloomberg Intelligence’s Senior Oil & Gas Analyst Fernando Valle, notes that “China’s reopening faced a setback, weighing on oil prices as European and US economic activity weakens. The demand pressure may not last, as supply issues will likely be the greater factor in 2023. Shale growth continues to underwhelm, while Latin American, Russian and OPEC+ output may disappoint in the coming year. Colder weather may soon see higher demand for heating and power generation in the Northern Hemisphere.”