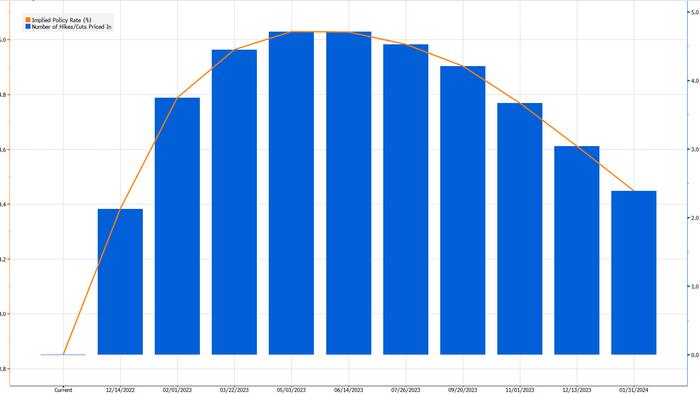 At its November confab, the FFR target was lifted by 75bps to 3.75-4.00%, as expected. The statement was dovishly received by the market after it stated that the Fed will consider the “cumulative tightening of monetary policy, the lags with which monetary policy affects economic activity and inflation, and economic and financial developments” when determining the pace of future rate increases. Analysts rationalized that with rates becoming more restrictive, the Fed can downshift to a slower pace of normalisation to assess the impact of the 375bps worth of tightening unleashed since March.

However, Chair Powell’s press conference injected a hawkish bias after he suggested that it was “very premature” to consider pausing the course of hiking. He said that the time to slow rate hikes might come as soon as the December meeting, but stressed that inflation remains well above the Fed’s longer-run goals, with price pressures evident across goods and services. And although longer-term inflation expectations still appear well-anchored, the Fed wants to see inflation coming down decisively, and is prepared to stay the course until the job is done, with the Fed strongly committed to its inflation target of 2%. He added that there was still “some ways to go” on rate hikes, while the ‘ultimate rate level’ might even be higher than previously expected (NOTE: the Committee forecast a 4.50-4.75% terminal rate in its forecasts).

The Fed chair said the debate on how far to lift rates was the important question, but there was still ground to cover before the Fed can ‘meet that test’, adding that there is a lot of uncertainty regarding the lagged impact of policy tightening. These themes have been largely echoed by officials in wake of the November meeting. And after CPI and PPI data eased in October, money market pricing implies a 50bps rate hike in December, with the terminal rate expected to be a little over 5% by mid-2023 – it is worth noting that for most of last week, expectations of the terminal rate were sitting between 4.75-5.00% until FOMC voter Bullard delivered hawkish remarks, where he suggested that rates were not yet “sufficiently restrictive”, “even under the most generous interpretation”; Bullard has been a policy leader in the post-pandemic era, with his hawkishness coming before other colleagues.

RATES: After the cooling October CPI inflation data, markets are pricing in a 50bp hike in December, which has been in fitting with commentary from some officials, although others do note that 75bps is still on the table and markets are currently implying a 23% probability of a 75bp move. We will look at the minutes to gauge the appetite among the FOMC on their keenness to start slowing the pace of rate hikes at next month’s confab. Many officials – including Powell – have stressed the terminal rate, or where the Fed gets to, as being more important than how it gets there, nonetheless, the hike increment decides how fast we get there and gives clues to how close we are to the terminal. The September SEPs (‘Dot Plot’) saw a peak rate of 4.50-4.75%, but it is likely that this will be revised higher in December so commentary in the minutes on participants’ views of the terminal rate will be key. Recent commentary from officials has implied a terminal rate of between 4.75-5.25%. Of course, how long the Fed needs to stay at the terminal rate is key as well, although that is inherently harder to forecast given the longer timeframe, participants are instead likely to suggest it will depend on how the economy evolves (‘data dependence’) and stress that the FOMC wants to see inflation clearly showing evidence it is returning back to its 2% target.

DATA: The October CPI report was not available to the Fed at the time of the November meeting so it will not be incorporated into the minutes, but the release has been a welcome report, though officials have stressed they want to see a more sustained inflation slowdown and are not to be over-persuaded by one month’s data. The labor market has remained resilient/tight despite all the policy tightening, something which the Fed would ideally like to see loosen. SGH Macro’s Tim Duy writes, “The Fed expects that markedly softer labor market conditions will precede the restoration of price stability and has not prepared for the opposite possibility”. Duy adds the Fed sees elevated inflation as having both transitory and persistent components, with persistent components preventing a return to target level inflation without softer demand, which will be realised with a substantially softer labour market. The Fed watcher also highlights this could create some messaging problems for the Fed, “If inflation is falling, what is the need for ongoing rate hikes? First, the Fed will say it needs to at least follow through with what has already become embedded in market expectations. Second, it can’t step down from the inflation fight with labor markets still tight and risk a reacceleration of activity”. Therefore, the minutes will be eyed for commentary on the central bank’s reaction function to both labor and inflation