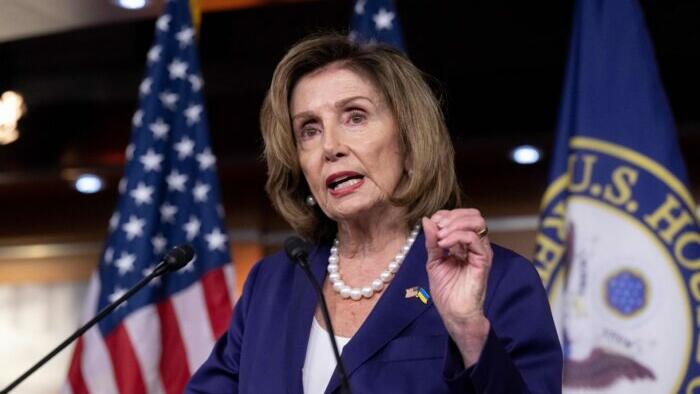 House Speaker Nancy Pelosi (D-Calif.) warned against a 2024 run by former President Donald Trump, which she claimed to be “bad news for the country,” while saying President Joe Biden should run again.

When asked on ABC News’ “This Week” whether a Trump 2024 presidential bid would be “good news” for Democrats, the speaker rejected the idea. “It’s bad news for the country, let’s put it that way,” Pelosi told host George Stephanopoulos without pushing back on the assumption.

“This will be a very important election, very dispositive of the direction our country will go in,” Pelosi said, before giving her full support for Biden’s leadership and a possible reelection bid.

“[Biden] has just done so many things that are so great, we need a lot more shows to talk about it,” she said of Biden. “He’s put money in people’s pockets, vaccines in their arms, children back to school, people back to work, for starters. … He has been a great president, and he has a great record to run on.”

Although saying she was reluctant to discuss Trump’s plans, the speaker accused the former president of undermining the integrity of elections by making election fraud claims, and endorsing what she called “strange kinds of people” to run for office.

“He’s not been a force for good,” Pelosi said. “So I don’t think his candidacy is a force for good for our country. But that’s up to the Republicans to decide who they’ll choose.”

“Understand this, we have very vast differences. Republicans do not support science,” she continued. “They disregard what we’re saying about climate. They don’t support governance, so they don’t want to honor what science tells us in terms of the planet, in terms of health care and the rest. So we have some very big differences. The main event of it all is the presidential.”

Control of House in Balance

Pelosi during her Sunday appearance declined to comment on whether to run for House leadership until the election results are final. Control of the House is still hanging in the balance as neither party has yet reached the 218-seat majority in the 435-member chamber.

As of Sunday, Republicans had 212 seats compared to 204 for the Democrats, with 19 races still to be called by The Associated Press.

Trump has been hinting for months about a 2024 White House run, revealing during a GOP campaign event in Ohio on Nov. 7, or election eve, that he will make a “big announcement” from Mar-a-Lago this coming Tuesday.

One of Trump’s advisers said the 45th president will “of course” announce that he is running for president despite calls from some Republicans to hold off. “It’s going to be a very professional, very buttoned-up announcement,” Jason Miller told Steve Bannon on Friday.

The announcement would end speculation over Trump’s potential run in 2024, which was largely stirred up in the wake of the November midterms. Some betting markets now give Florida Gov. Ron DeSantis, not Trump, the edge to win the White House in 2024, after the Florida governor won overwhelmingly across his state last week.

Biden, on the other hand, said last Wednesday that he’ll need to discuss among family members before making a judgment on whether he will seek reelection in 2024, noting that an official call can be expected “early next year.”