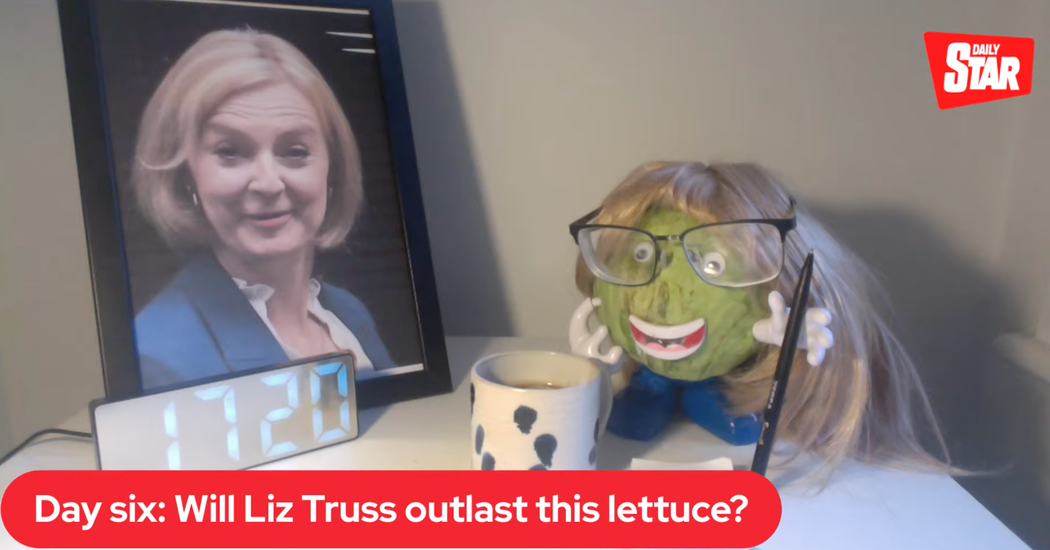 
LONDON — As support withered for Prime Minister Liz Truss of Britain, so did the ball of lettuce.

Purchased at a Tesco grocery store for 60 pence (68 cents), the lettuce became a caricature of the Conservative leader’s flailing hold on power, pitted against the prime minister by The Daily Star, a British tabloid.

“Will Liz Truss outlast this lettuce?” the newspaper asked in a live video that has been running since Oct. 14, attracting bounds of viewers and comments on social media.

The lettuce gag was inspired by The Economist, which noted on Oct. 11 that between a near-immediate political implosion at the beginning of her tenure and the 10 days of mourning after Queen Elizabeth II died, her grip on power amounted to seven days, or “roughly the shelf-life of a lettuce.”

In the end, the lettuce emerged victorious after Ms. Truss resigned on Thursday. Someone flipped the photo of Ms. Truss face-down on the table, colorful lights swirled, and a recording of “God Save the King” played on repeat as nearly 20,000 people watched live.

“The lettuce outlasted Liz Truss,” the video declared. Minutes later, a remix of “Celebration” by Kool & the Gang set the mood.

To be compared directly to lettuce was one of many indicators that Ms. Truss had a nightmare turn as Britain’s leader since the Conservative Party elevated her in September to replace Boris Johnson. Her proposed tax-cut plan so alarmed voters and the markets that she was forced to reverse herself and fire her top ally, leaving many to wonder if she would be pushed out just weeks after she started.

The Daily Star took The Economist’s joke and ran with it, plopping the lettuce on a table next to a framed photo of Ms. Truss. The lettuce was later given a glow-up, featuring a blonde wig, glasses and Mr. Potato Head-like feet and hands, while it was surrounded with crackers and a mug. At one point the lettuce wore an eye mask to get some rest, and on Tuesday the newspaper declared in a front-page headline: “Lettuce Liz on Leaf Support.”

To many of the newspaper’s readers, it was a ludicrous statement befitting of a ludicrous moment.

The lettuce did not wilt in its six days in the spotlight. Lettuce can generally stay crisp for about seven to 10 days — though that’s typically the life span of refrigerated lettuce, not a head that’s been sitting out on a table and wearing a wig.

It was a close match with Ms. Truss. Pressure on the prime minister had steadily grown but she had fought back demands that she resign, declaring on Wednesday in a session of prime minister’s questions in Parliament that “I am a fighter and not a quitter.” It was a brutal showing, with fierce questioning from opposition lawmakers, and she relented on Thursday.

News outlets have been practicing live-video gimmickry since 2016, when Facebook Live was the tool of choice. Notably, in a video that attracted copious copycats, BuzzFeed commanded the attention of millions who watched two employees put nearly 700 rubber bands on a watermelon until it exploded.