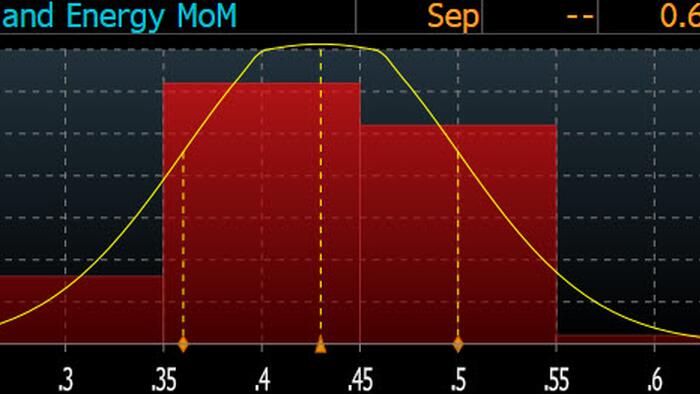 
The most important day of the week – and month – is finally here. After a stronger than expected employment print, and a stronger than expected PPI report today both hammered stocks sending them tumbling to fresh 2022 lows after falling for 6 consecutive days, we finally get the September CPI report, a number which as we reported previously could send stocks soaring as much as 3% or tumbling more than 5%. One thing is certain: if we are going by recent historical precedent, expect lots of digital red ink tomorrow (see below).

For those who missed our market matrix, here it is again courtesy of JPM’s Andrew Tyler:

Now that we know how the market should react, here is what Wall Street expects:

What about the banks? Here are the big ones, starting with Goldman:

Our US economists expect the headline to show a +0.3% MoM gain (+0.1% in August) and core to gain +0.5% (+0.6% in August). They also recently published a note on inflation here, pointing to an array of metrics indicating that pressures remain elevated and broad-based. Our economics team forecasts a +0.4% print for core (+0.4% in August).

A detailed breakdown by Bank reveals that most expect a core CPI print between 0.3% and 0.5% (which probably means a print either below or above this range).

A relatively tame distribution across an average estimate of 0.43% and a 0.4% median.

Not surprisingly, most traders are bearishly biased ahead of the CPI print (we will note some more on this in a subsequent post) because with only one exception – the CPI report for July –  the S&P 500’s response has been to slide every time the data was released as inflation came in mostly hotter than expected. Another reason: the S&P has fallen on 7 out of 9 CPI release days in 2022, which is likely the result of core CPI prints that have been almost uniformly higher than estimates. In fact, as shown in the chart below, core CPI has come in at or above expectations on 9 of the past 11 occasions.

Confirming that at a time when the “data-dependent” Fed only cares about taming inflation, the CPI has become the most important driver of short-term returns, Barclays strategists plotted the S&P 500 performance against top 10 economic indicators such as monthly payrolls and quarterly GDP; they found that over the past decade never have stocks been so negatively reactive to an economic indicator as they are now to CPI.

From a purely fundamental perspective, JPM chief economist Michael Feroli laid out the following reasons for his CPI forecast:

“We estimate that the consumer price index (CPI) rose 0.3% in September. This would be the firmest print since June, in part because we think that the September decline in the energy CPI (forecast: -2.4%) will be more modest than the drops that were reported for July and August. We believe headline inflation will remain strong on an over-year-ago basis, but we do expect some cooling relative to recent prints, with the headline CPI up 8.1%oya in September. We believe that food price inflation remained strong in September, but we do expect some softening relative to recent gains with the food CPI up 0.7% in September. Away from food and energy, we forecast another solid print for the core CPI index (0.5%), with this measure up 6.5%oya in September (up from 6.4% in August).

For the core index, we think the September monthly change will be right on the cusp between rounding to 0.4% and 0.5% with a 0.45% reading expected. We think the firmness in this index will continue to be tied to strength in the rent measures, and we forecast that tenants’ rent rose 0.72% in September while owners’ equivalent rent increased 0.69%. But we do expect declines in prices for a few other categories to help the monthly change in core inflation to step down between August and September. Industry data signal cooling in vehicle prices and we forecast that new vehicle prices edged down 0.1% in September while used vehicle prices fell 1.2%. We also look for a 0.7% decline in lodging prices as the jump in prices reported earlier in the year continues to come undone. Communication prices have been trending lower lately and we forecast a 0.1% decline for this CPI measure for September.

Rent isn’t the only area for which we expect firmness in September and we estimate that medical care prices in the CPI rose 0.5%, continuing their solid upward trend. We also believe that public transportation prices rose 0.8% in September, undoing a portion of the 3.2% drop reported for August.”

What about Goldman? Well, as the bank writes in its CPI preview note (available to pro subs here), Goldman expects a 0.41% increase in the core CPI in September (just below that of JPM), corresponding to a 0.2% increase in the year-over-year rate to 6.50% (in line with consensus), and expects a 0.26% increase in headline CPI, corresponding to a 0.2% decline in the year-over-year rate to 8.10%, also on top of expectations.

The bank’s sellside researchers are looking for strength in new car prices & services inflation (due to wage pressures, labor shortages, and elevated short-term inflation expectations). Specifically, they also look for a strong set of shelter readings (rent +0.70% and OER +0.64%), a 2% rebound in airfares, and a 0.5% rise in education prices; they also expect more gains in the car insurance category, as carriers push through price increases to offset higher repair and replacement costs. The bank highlights three key component-level trends this month.

Curiously, contrary to prevailing consensus, Goldman notes that “whispers are for a softer than consensus print hence some asymmetry to the downside for stocks.“

Finally, in yesterday’s market wrap note from Goldman’s John Flood (also available to pro subscribers), he lays out his own market reaction matrix which is not that far off from what JPMorgan expects: here is his framework:

MARKETS ARE AT A PIVOTAL JUNCTURE…if CPI misses, then we can easily take out a rate hike from 2023 pricing…and the FOMC may be more inclined to signal the end is in sight. Stocks would rally hard as we approach the peak of the cycle, and we would see a drop in implied vols across the rates, fx and equity complex. If we transition into a “post peak-hawkishness” world whereby the Fed delivers the forwards but doesn’t continue to out-hawk the market, then I think two key things happen to rates…firstly, the front-end gets pinned and the 10y leads the move in either direction. This is a marked shift from the year-to-date dynamics whereby the curve traded with an inverse beta to rate level…relatedly, if central banks do indeed signal the end of the hiking cycle in Q1 23, then the market moves to trade “inflation tolerance” – the idea that a somewhat higher level of inflation is accepted. This means steeper rate curves and higher inflation breakevens. NEVERTHELESS…a big beat in core inflation will set the market loose again…and one should be prepared to re-engage in this year’s dominant market themes: higher US rates, stronger $, lower stocks…

Finally, perhaps the most dovish take comes from JPM economist Michael Hanson who says that inflation (away from Europe) appears to have peaked:

From a global perspective, headline inflation looks to have peaked outside of Europe and is now slowing as we have anticipated. We also forecast a gradual deceleration in core inflation as well, although September releases thus far look to be running slightly above expectations on net. Based on a combination of available September CPI data and our forecasts, the %3m rate in global core inflation ticked up to a 4.9%ar in September from a 4.8%ar in August. Monthly gains in core prices are still strong by historical standards and are expected to remain above central bank comfort zones into early next year.