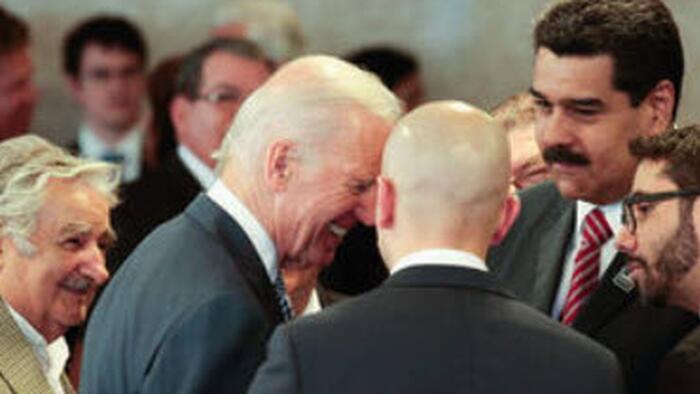 
Having been shunned by the Saudis (who are now “colluding with Russia to hurt low income countries” according to a White House spokesman this morning on CNBC), President Biden has lurched all the way to negotiating with another “dictator”.

The Wall Street Journal reported Wednesday that the Biden administration proposed a deal that will ease sanctions on Venezuela, allowing Chevron to pump oil in the country after OPEC+ unveiled its largest production cut since COVID (despite Biden’s begging).

According to people familiar with the proposal, in exchange for significant sanctions relief (and the potential reopening of US and European markets for Venezuelan crude exports), the government of Venezuelan President Nicolás Maduro would resume long-suspended talks with the country’s opposition to discuss conditions needed to hold free and fair presidential elections in 2024

Officials have reportedly also worked out a deal that would free up hundreds of millions of dollars in Venezuelan state funds frozen in American banks to pay for imports of food, medicine and equipment for the country’s battered electricity grid and municipal water systems.

Chevron spokesman Ray Fohr didn’t comment on the proposed deal, but said that in Venezuela, “we have dedicated investments and a large workforce who are dependent on our presence.” He said the company is in compliance with the current sanctions framework.

This is an interesting shift given that in Feb 2021, the Biden administration will continue recognizing Venezuela’s opposition leader Juan Guaidó as the legitimate president of the country and won’t negotiate anytime soon with President Nicolás Maduro.

“I certainly don’t expect this administration to be engaging directly with Maduro,” State Department spokesperson Ned Price said in a briefing with reporters Wednesday.

It seems resurgent gas prices and re-plummeting approval ratings ahead of the Midterms (and a record low 22 days of supply left in the SPR) are just the recipe for the memory hole of all the Biden rantings against Trump dealings with Maduro.

US TO EASE SANCTIONS AGAINST VENEZUELA, ALLOWING CHEVRON TO RESUME OIL PRODUCTION

So what happens to the CIA’s puppet regime there now? Quietly disappeared in the night?

Simply put, the fact that Biden is going cap-in-hand to Venezuela to offer them a deal to increase crude production (despite Maduro being a “narco terrorist”), confirms the message that Saudi Arabia was implicitly sending with yesterday’s OPEC+ decision that they are the boss when it comes to the world’s most prized commodity – which despite the outcry continues to be crude oil.

Summing things up quite succinctly, @BradHuston noted on Twitter: “So basically Biden is saying that domestic producers are more evil than Venezuela’s Nicholas Maduro.”