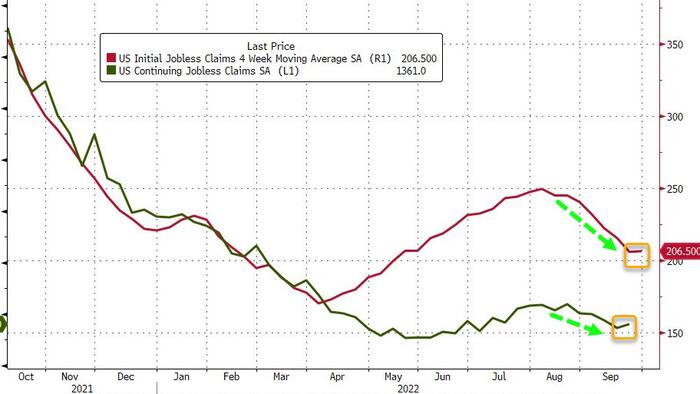 However, the last week saw claims increase from a revised lower 190k to 219k, which upticked the 4-week average for the first time in 8 weeks…

We don’t know but wonder if this shift is related to Hurricane Ian in any way.

Additionally, as the chart above shows, the number of Americans on continuing claims, which has also been trending lower, ticked up last week from 1.346mm to 1.361mm.

This is not the magnitude of ‘bad’ news that’s required to get The Fed off its ‘hawks to the moon’ seat, but it is worth keeping an eye on as it perhaps represents a trend change.

This small increase is interesting in context of other reports.

U.S.-based employers announced 29,989 cuts in September, a 46.4% increase from the 20,485 cuts announced in August. It is 67.6% higher than the 17,898 cuts announced in the same month last year, according to a report released Thursday from global outplacement and business and executive coaching firm Challenger, Gray & Christmas.

September marks the fifth time this year that cuts were higher in 2022 than in the corresponding month a year earlier.