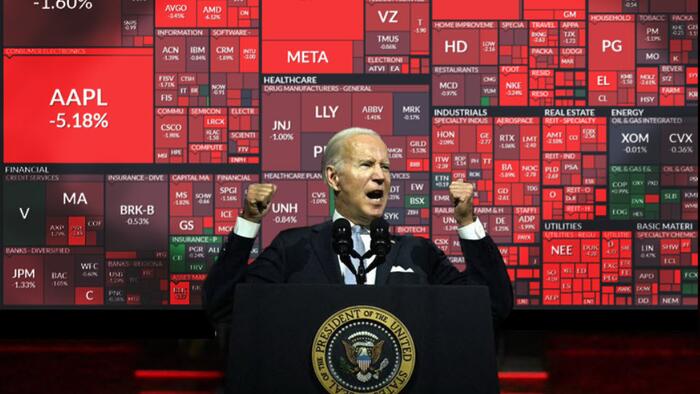 
After yesterday’s euphoric, BOE-inspired, short-squeezed meltup, today was supposed to be a continuation rally courtesy of one of the most oversold markets in history.

It didn’t quite work out that way, and stocks opened into an absolute rout, with the NYSE TICK indicator not turning positive until almost one hour into trading after one of the biggest negative ticks of 2022.

As a result, those who expected yesterday’s BOE “temporary QE” pivot would be enough to push stocks higher for at least a few more days – here even some of the biggest pessimists expected this bear market rally to last for 2-3 days at least – were promptly disappointed as stocks tumbled all day, dropping almost to new 2022 lows…

…. in a broad, and high-volume selloff which dragged every sector lower.

The selling which for all intents and purposes pushed stocks to 2022 lows (and the lowest since Nov 2020), meant that spoos are now down 7 of the past 8 days, with today’s drop more than wiping out all of yesterday’s gains.

But unlike recent selloffs which were mostly catalyzed by surging yields, or a soaring dollar, today we have seen neither, as both 10Y TSY yields (as 30Y gilts have gone nowhere)…

… and the Bloomberg dollar index slumped all day in what would otherwise have been a huge relief for risk assets.

One possible reason for the continued USD weakness: after a modest attempt to rebound, Nov Fed hike odds slumped again, and after pricing in nearly 90% odds of a 75bps in Nov, the odds are back to just 63% and dropping.

But while oil did indeed enjoy the slide in the dollar, avoiding an even bigger rout thanks to a Reuters report that OPEC+ would cut output by 500K-1MMb/d next week…

… the same can not be said for US stocks obviously, as instead of macro traders today were focused on the micro, with Apple tumbling for a second day in a row, and one of its biggest slides in the past year…

… this time following a rare downgrade from BofA.

The continued implosion in AAPL and other tech names has pushed Goldman’s most-shorted tech index to March 2020 levels, and is about to take out that particular support, bringing the index back to Dec 2018 levels.

Additionally, the absolute disintegration in used car retailer, Karmax, which lost a quarter of its market cap today following catastrophic earnings and a dire assessment of the industry, certainly did not help the apocalyptic investor sentiment.

In any case, whatever prompted today’s sell off – and as Goldman explained there is much more selling to come – one thing is certain: stocks can keep crashing 10% every day in perpetuity and thanks to Zeno’s paradox, they still won’t hit bottom.