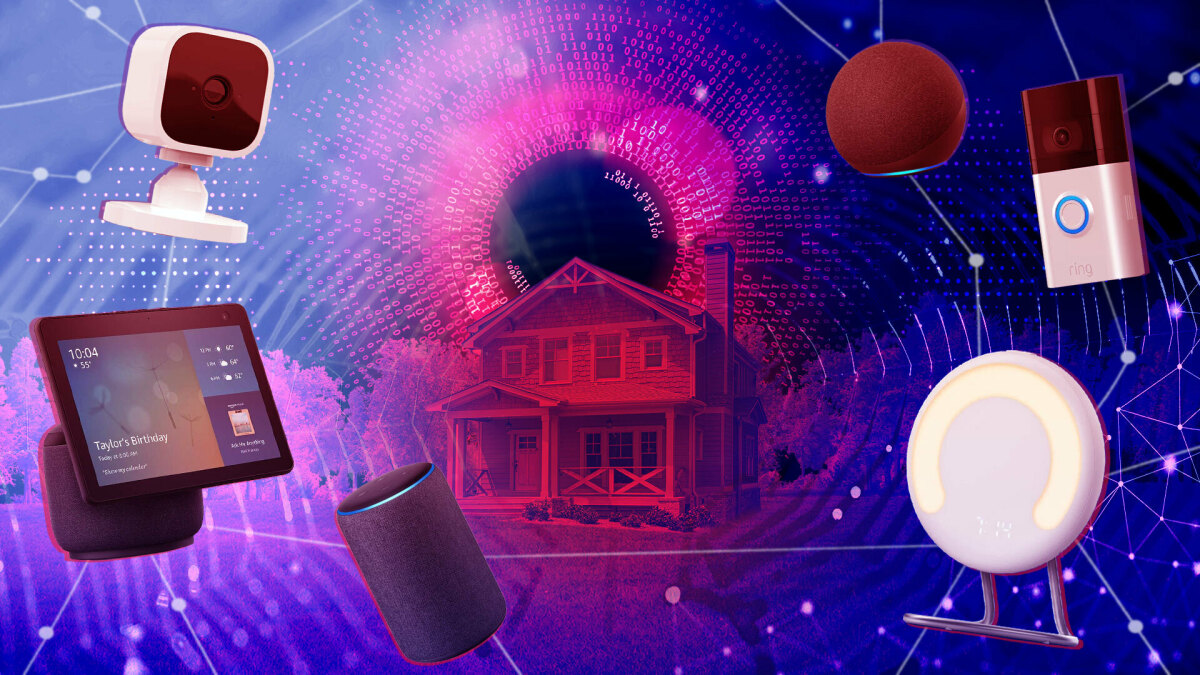 
Back in my day, you turned devices off when you didn’t need to use them. But in the age of Amazon, your “smart” home and its ecosystem of gadgets will ideally always be turned on. That vision even has a cool-sounding name: ambient intelligence. It’s A.I. with a new spin and the promise of a (corporate) bear hug.

While I’m not anywhere near old enough to have truly earned my rose-tinted, geezer mindset, I am wrinkled just enough to remember a time before every device was connected to the internet; before the internet of things. So when I look at the direction Amazon is taking its ever-expanding hardware business and the welcoming, futuristic-sounding spin it’s using to sell this to consumers, well, I just can’t kick this dire feeling in my gut.

At a device announcement event on Wednesday, Amazon laid out its vision for “ambient intelligence” (an obvious play on artificial intelligence), a term the company has used since at least 2021. Here’s what Amazon meant by that at the time.

“In the ambient-intelligence vision, an AI service such as Alexa makes sense of the state of your environment, including devices, sensors, objects, people, and activity around you, to help you in every situation where you need assistance — either reactively (customer initiated) or proactively (AI initiated).”

Amazon cut through all that tech jargon at its event with a bunch of practical examples of how ambient intelligence will play out. It added a new bedside sleep tracker called Halo Rise (which is kind of a Google Nest ripoff) and an always-on TV to a long list of devices in the company’s roster of things you’re supposed to plug in, turn on, and… stop thinking about. While no one would deny the usefulness of products like a Ring video doorbell or an Echo smart speaker, Amazon’s marketing speak for “ambient intelligence” sounds a whole lot like giving away the entire infrastructure of your life to one megacorporation with a long history of privacy issues.

Inviting Bezos into every room

Of course, Amazon didn’t just start mobilizing its ambient intelligence operation overnight. This has been years in the making, arguably ever since the Alexa virtual assistant came into being in 2014. Since then, Amazon has been working towards making sure you can’t walk into any room in your home without engaging with one of its products, like Echo smart speakers, smart locks for doors, and even thermostats.

It’s a virtual finger in every household pie.

In the ideal Amazon-run home, this pervasive tech-web would exist moments before you even step inside. Let’s take a tour:

First, wave hello to the Ring video doorbell as we approach the front door. (Hi, Jeff!) You don’t have to worry about protecting your home from potential threats anymore — Amazon will keep an eye out. Sure, you might get sent a motion-tracker notification, but you can just swipe that away like you swipe away most Ring notifications because it usually means there’s a squirrel outside. (But, hey, maybe one time it will actually detect something bad and Amazon can give the footage away to cops without your permission. Convenience!)

It’s tracking every squirrel and bird out there.
Credit: Smith Collection/Gado/Getty Images

Now, wipe your shoes on the mat and follow me into the living room where have a 75-inch Amazon Omni TV that never. turns. off. Say bye-bye to the boring black screens that have signified that a TV is not in use for decades — this TV will show you widgets, photos, and other… things! This is all very helpful, of course, because it will draw your attention to the fact that a giant screen is in the room. Okay, maybe you don’t intend on using it now, but that’s not the point. There’s a chance that simply looking at it might seed the thought of watching something into your brain. Something on Prime Video, perhaps? I hear The Lord of the Rings: The Rings of Power is good.

Next, follow me as we go down to the lovely basement in our Casa de Alexa. Feeling too cold in the ol’ man-cave? Just give Alexa a shout and she’ll adjust the temperature using the connected thermostat. WiFi struggling to cover everything downstairs? Simply expand it with an Eero router network, silly, which (you guessed it) is owned by Amazon. Heck, if you need to heat up some Pizza Rolls, Alexa can take care of that with this microwave.

14 reasons not to get a Ring camera

I think you’re starting to get the picture.

The idea here is for every room to have some kind of ambient Amazon device whirring in the background — whether it’s a doorbell on the porch, a TV in the living room, or a weird contactless sleep tracker on your bedside table. Of course, you’ll also have Echo speakers strewn throughout the place, which you can use to ask Alexa to play music, or tell you the weather, or simply to turn the lights on or off. (I actually had an old roommate who would shout at Alexa to turn the lights off while he stood next to the light switch.)

The only room that’s safe from Amazon — for now — is the bathroom. Who knows, though? Maybe Amazon will release an Alexa-powered toilet or bidet. The company recently spent $3.9 billion on the primary care provider One Medical, so it’s possible Amazon can quietly measure your gut health, too.

Alexa, live my life for me? Do you trust Astro?
Credit: Amazon

The point to all of Amazon’s ambient intelligence machinations is, above all else, to make you buy products. That’s not surprising or even sinister in and of itself, but innocently buying a smart speaker so you can request songs hands-free could lead down a road of buying a Ring camera, then a Halo Rise sleep tracker, then an always-on TV, and so on.

Eventually, Alexa ends up owning your home — not you.

And if that’s how some people want to live, then more power to them. But for me, having this intricate spider web of one company’s devices constantly monitoring my every move sounds more suffocating than liberating. Heck, the Amazon Astro robot can move with you. Don’t worry, though, it’s just ambient intelligence that’s powering the cute little surveillance robot as it learns the ins and outs of your home. Attach a marketing term to it and suddenly it’s less unnerving.

It all feels like a way to make people self-enforce and shrug off corporate surveillance with a smile. Sure, there’s a history of Amazon employees listening in on Alexa conversations and even tracking location data, but at least Alexa can give you the score of the Thursday Night Football game, which also happens to be broadcast exclusively by Amazon.

I wasn’t joking when I said Amazon has a finger in every single pie.

What’s worse is that Amazon knows its notorious reputation when it comes to privacy and now has to briefly acknowledge when a product doesn’t have a camera or microphone, like it did during the Halo Rise announcement. Maybe the data these devices pull is encrypted very well, but ultimately, a device that’s always monitoring you is a device that’s always compromising you in some way.

I don’t want to be a doomer about this stuff (and I only have so much room to talk as a Prime subscriber myself), but I’m just worried about a world where we can’t escape Amazon.

I don’t want an Amazon-branded doohickey to tell me how I’m sleeping because chances are I already have a pretty good idea of that. (Pretty well, lately.) I don’t want a TV that’s always on because sometimes it’s nice to turn the TV off and be alone with my thoughts for a while. And I really, really don’t want a creepy little robot following me around the house like a pet.

Maybe this is an overreaction to something you could reasonably describe as advertising spin. “Ambient intelligence” definitely sounds like it came out of a boardroom. If you make something sound like it exists in a benevolent sci-fi utopia, it’s less threatening to consumers, right? And judging by Amazon’s massive success over the years, the sales folks over there clearly know what they’re doing.

Look, I like technology because it’s fun to use. The problem here is that Amazon’s trying to make technology that uses you to harvest data — be it for advertising, police investigations, or whatever else — and polish it up so it seems squeaky clean instead of dystopian.

You do what you want with your life, but personally, I’m going to keep my home as analog as possible.

Learn to code with this discounted certification bundle