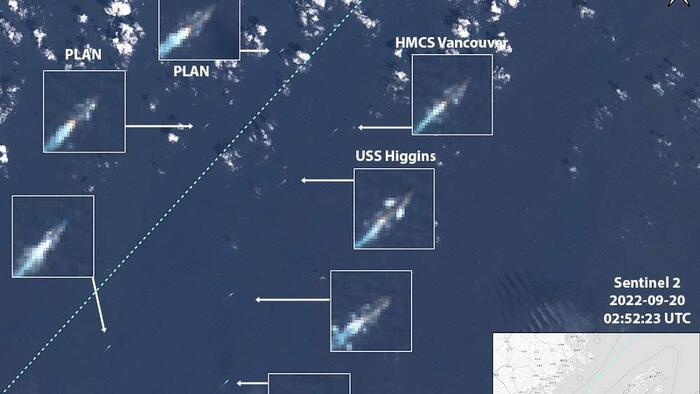 A group working for peaceful relations between the United States and China on Monday sent a letter to leaders of both countries imploring them to end or limit “dangerous and provocative military maneuvers” in the South China Sea and near Taiwan that could lead to all-out war.

The group documented 115 “provocative maneuvers and close encounters” between U.S. and Chinese forces this year, with a dramatic increase following a controversial August visit to Taiwan by a U.S. congressional delegation led by House Speaker Nancy Pelosi (D-Calif.).

According to the document, China initiated 93 of the incidents, while the U.S. triggered 22. They ranged from “modest actions” by one or two ships or planes to “large-scale maneuvers” like a Chinese air force exercise involving 62 warplanes along China’s maritime border with Taiwan.

“Whenever these maneuvers occur, it is common for the opposing side to mobilize its own air and naval forces to guard its territory (or those of its allies) and ward off any intruders,” the letter notes. “This has resulted, on some occasions, in close encounters between the ships and planes of the opposing sides—with only the skillful action of pilots and helmsmen preventing a potentially deadly collision.”

“This good fortune, however, is not likely to last forever,” the group cautioned, “and, with the frequency and scale of these maneuvers increasing by the week, the likelihood of a mishap is increasing exponentially.”

“Given this danger, we call on you to immediately take unilateral and bilateral steps to reduce the risk of an accidental or unintended clash between U.S. and [Chinese] air and naval forces in the West Pacific by discontinuing or scaling back military exercises that could be deemed threatening by others,” the letter continues.

Satellite imagery showing US and Chinese warships on either side of the Taiwan Strait median line on Sept.20…

The activists also urged the two countries’ leaders to hold talks “between military officials of the two sides,” plus “other interested parties such as Taiwan, Vietnam, and the Philippines,” to create “‘rules of the road’ for safe, nonthreatening air and naval maneuvers.” The group’s letter comes amid intense U.S. diplomatic efforts to persuade China to be less supportive of Russia’s invasion of Ukraine.

“It is peculiar,” wrote South China Morning Post opinion contributor Dong Lei on Friday, “how Washington expects help from China on Ukraine while maintaining a campaign of hectoring and humiliation, including on China’s refusal to condemn Russia, and on Taiwan.”