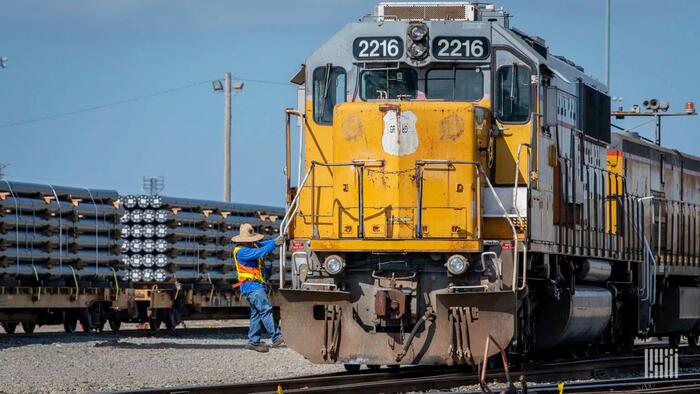 
By Joanna Marsh of FreightWaves

The International Association of Machinists and Aerospace Workers (IAM) District 19 has reached a new tentative agreement with the group representing the freight railroads in contract negotiations.

“Throughout this process of seeking a new contract, you have stood strong and demanded the fair treatment you deserve from the carriers,” IAM said in a Tuesday notice to members. “Your solidarity and strength have made national headlines and, most importantly, given your District 19 negotiating team the power we need at the negotiating table to make the carriers listen to your needs.”

According to IAM, highlights of the agreement include a cap on health care costs; codified language regarding travel costs for roadway mechanics; further bargaining over travel expenses and per diem; and plans to conduct a joint study on overtime, forced overtime policies and overtime meal options.

IAM will send the agreement to its nearly 5,000 members for approval. A cooling-off period during which members cannot legally strike will be in effect through Dec. 9, and “in the meantime, we continue to work with coalition partners to secure the best deal possible.” The December date also puts IAM District 19 members back on schedule with many other rail unions, IAM said.

“As always, IAM District 19 members will have the final say in this improved Tentative Agreement. Ratification vote details will be shared with every member soon. The IAM District 19 Leadership Team will soon be visiting shops from coast to coast and looks forward to answering your questions,” IAM said.

NCCC confirmed that this second agreement implements the recommendations of the Presidential Emergency Board (PEB), the third-party, three-person board appointed by President Joe Biden to find conditions that both the unions and the railroads could agree upon as they negotiated a new labor agreement.

Those recommendations include a 24% wage increase during the five-year period from 2020 through 2024 — with a 14.1% wage increase effective immediately — and five annual $1,000 lump-sum payments, NCCC said.

“With today’s announcement, all unions in the national bargaining round have ratified or are in the process of ratifying new collective bargaining agreements,” NCCC said, providing a link to the status of all pending ratification votes.

A new labor deal for union members has been in the works since January 2020, but negotiations between the unions and the railroads failed to progress. A federal mediation board took up the negotiations but released the parties from those efforts earlier this summer.

The PEB convened in July and August to come up with ways that the unions and railroads could resolve the impasse and issued recommendations last month. The recommendations were meant to serve as a jumping-off point for a new contract.

Two of the largest labor unions — those representing locomotive engineers and train conductors — were the last to reach a tentative agreement with the railroads. Their agreement averted a strike that could have begun as early as Sept. 16.