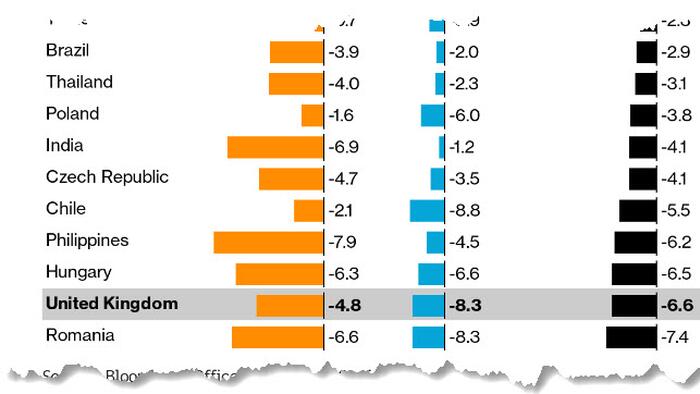 The UK’s progression toward emerging-market status is moving so fast that it’s hard to keep up.

On Tuesday the IMF came out to upbraid the new administration on its inappropriate and poorly-targeted fiscal policies. South American politicians can surely empathize. Now the central bank is buying bonds. Why? Because the government wants to sell more of them to pay for the aforesaid fiscal policies.

In other words, the central bank will be financing inflationary government spending (that just happens to reward a core constituency of the new government). To compare this with an emerging market may be unfair. This is frontier-market behavior.

Here’s a chart of budget and current-account deficits for EM countries for which I was able to quickly find reasonably up-to-date data. Note, this data excludes last week’s spending announcement because we don’t have numbers on that. Also, I used the UK’s Office for National Statistics figure of 8.3% for the 1Q current-account deficit, and Bloomberg data for the rest.