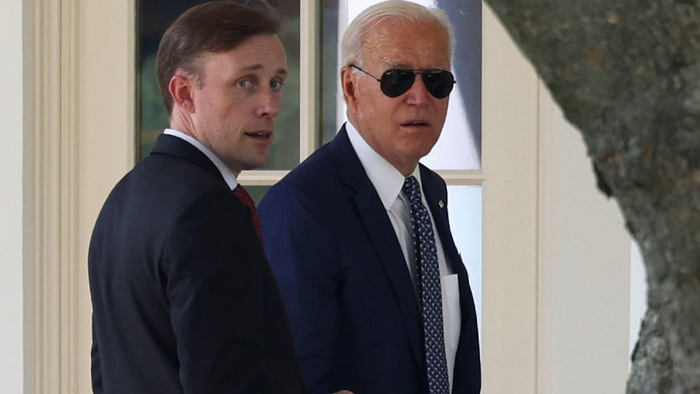 
After it was previously revealed in The Washington Post days ago that US officials have been pushing back against nuclear threats issued by Russian President Vladimir Putin and his top officials via diplomatic backchannels, White House national security adviser Jake Sullivan issued his first public response and the administration’s counter-warning Sunday.

Sullivan warned the US is ready to “respond decisively” if Russia crosses the “line” regarding nuclear or other weapons of mass destruction, stressing it would result in “catastrophic consequences” for Moscow. Sullivan made the statements in three separate appearances on Sunday news shows.

The Hill notes that while he didn’t get into the details of specific US actions – such as the potential for a US nuclear response – he repeated his words of willingness to “respond decisively” seven times in the three appearances Sunday.

“Let me say it plainly: If Russia crosses this line, there will be catastrophic consequences for Russia,” Sullivan told NBC’s “Meet the Press” in the Biden administration’s strongest warning thus far.

He added, “The United States will respond decisively. Now, in private channels we have spelled out in greater detail exactly what that would mean, but we want to be able to have the credibility of speaking directly to senior leadership in Russia and laying out for them what the consequences would be without getting into a rhetorical tit for tat publicly.”

He also said that Ukraine’s Zaporizhzhia nuclear power plant falls under the administration’s warnings related to Russian actions which could cause nuclear catastrophe. Sullivan outlined that any accident or deadly radiation incident at the plant, which is Europe’s largest, would be Russia’s fault, given its forces occupy the site:

“It is actually still being operated by the Ukrainian operators who are essentially at gunpoint from the Russian occupying forces, and the Russians have been consistently implying that there may be some kind of accident at this plant,” the US national security adviser said.

On the same day a fresh interview with Ukrainian President Volodymyr Zelensky aired on CBS wherein he also addressed Putin’s nuclear rhetoric. Putin it must be recalled, in his ‘partial mobilization’ speech on Wednesday vowed to defend Russian territory (to include portions of Ukraine which are currently holding a 5-day referendum on joining the Russian Federation) “by all available means” – further saying he’s “not bluffing”.

Zelensky in the weekend interview called it “a very dangerous signal” at a moment of success and momentum for Ukraine’s ongoing eastern counteroffensive.

“He knows that he’s losing the war,” Zelenskyy said. “In the battlefield, Ukraine has seized the initiative. He cannot explain to his society why, and he is looking for answers to these questions.”

This pressure turned this war into an existential conflict for Russia, making escalation to a nuclear level a real possibility.

We let a networked swarm drive our policy decisions and this is the consequence.https://t.co/bkL7DlnWND

Zelensky explained that he’s taking the nuclear threat seriously: “Maybe yesterday it was a bluff. Now, it could be a reality,” he said in the “Face the Nation” interview. “He wants to scare the whole world. These are the first steps of his nuclear blackmail. I don’t think he’s bluffing. I think the world is deterring it and containing this threat.” The Ukrainian leader added, “We need to keep putting pressure on him and not allow him to continue.”

But then again, it’s more likely the weight of Western sanctions pressure and ongoing unprecedented shipments of NATO weapons into Kiev that’s leading to what’s increasingly looking like dangerous nuclear brinkmanship – as at the same time a diplomatic solution or potential for sit-down negotiations looks to be completely in the rearview mirror.

In the meantime, Putin doesn’t look in the mood to back down either, now having expended so much in blood and treasure in the “special operation” launched seven months ago…

“We cannot, we have no moral right to hand over people close to us to be torn to pieces by the executioner. We cannot fail to respond to their sincere desire to determine their own destiny.” pic.twitter.com/RwzvDcpfyr