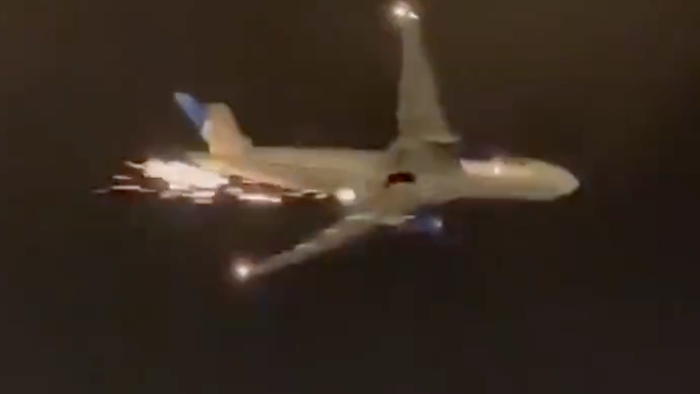 
The Federal Aviation Administration has launched an investigation into a mechanical issue that resulted in sparks shooting out from the bottom of a United Airlines flight on Wednesday night from Newark Liberty International Airport.

United Airlines Flight 149 departed from Newark around 2300 ET Wednesday, headed to Sao Paulo–Guarulhos International Airport with 256 passengers on board. Moments after takeoff, the Boeing 777-200ER suffered a “mechanical issue,” United said in a statement indicating that an initial maintenance inspection pointed to a failed hydraulic pump.

A photographer on the ground captured video of sparks shooting out the back of the Boeing 777.

🚨#BREAKING: Sparks and falling debris falls as A United Airlines plane as it takes off

Sparks and falling debris where reported from United airlines 777 as it took off from Newark Airport The Airlines had to make a emergency landing but landed safely pic.twitter.com/EArnCNtA1v

Here’s what appears to be some of the metal debris that fell from the passenger jet.

United said Flight 149 “remained in the air to burn fuel and then landed safely.”

Flightaware data shows the plane went hundreds of miles off the coast of New York City to burn fuel before returning to Newark.

FAA released this statement about the incident:

“United Airlines Flight 149, a Boeing 777-200, landed safely at Newark Liberty International Airport shortly before 1 a.m. local time today after the crew reported an emergency. The flight departed Newark and was headed to So Paulo, Brazil before it returned. The FAA will investigate.”

The photographer who caught the incident on video told ABC7 New York: “Never I would’ve imaged that I would witness one in real life… I was pretty shocked.”