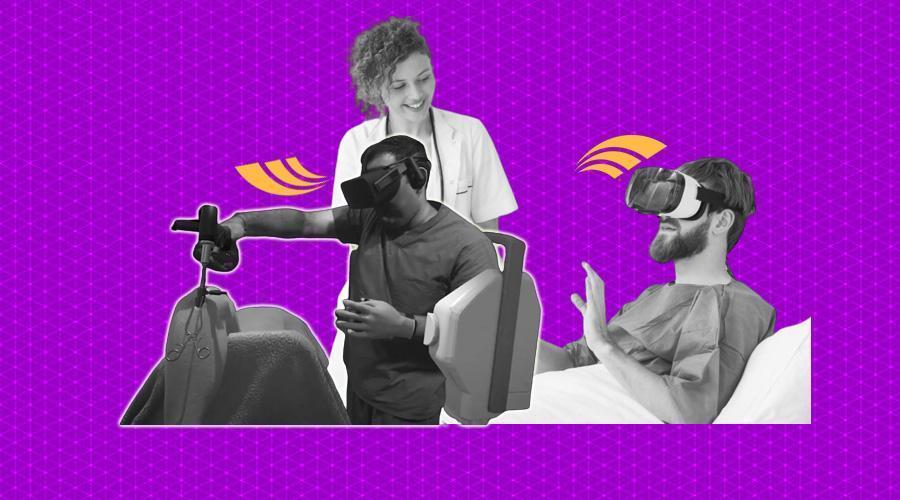 Virtual reality is becoming a part of our daily lives at an astonishing pace. While VR is generally used in the gaming and entertainment industries, the technology has definitely made its way to more crucial purposes, including becoming a vital element for treatment. Based on recent innovations, virtual reality is transforming the healthcare sector. There are many benefits that the industry is realizing from virtual reality. Integrating VR solutions into medical treatments was definitely a clever decision since the importance of VR in healthcare has reached peak points and is presently used in many medical fields. Applications of virtual reality solutions have made their way to robotic surgery, and healthcare devices, and are being accepted by people and organizations across the world.

Reports suggest healthcare is one of the biggest adopters of VR that encircles robotic surgeries, phobia treatment, surgery simulations, and skills training. The launch of the Oculus Rift and HTC Vive has further augmented the usage of virtual reality in various industries. Quite recently, a team of researchers at Beth Israel Deaconess Medical Center in Boston surveyed to find out that the use of a VR headset can actually reduce the use of anesthetics among patients and minimize pain and anxiety among them. The VR programs integrated into this headset encompasses 360-degree views of a peaceful meadow, mountaintop, or forest, guided meditation, or videos played against the backdrop of a starry sky.

So, how does this VR headset work?

Research claims that virtual reality might actually relieve pain during surgery. These new VR headsets are making anesthetics irrelevant during surgery. The researchers from the medical centers divided a group of patients into two. On average, a patient would need 750.6 milligrams per hour of the sedative propofol, meanwhile, people looking at other relaxing VR content such as meditation, nature scenes, and videos only need 125.3 milligrams. The group of patients that were offered the VR headsets also recovered faster, leaving the post-anesthetic unit just after 63 minutes on average, while it generally takes 75 minutes. Scientists claim that VR technology basically distracted the patients from pain and acquires their attention.

The emergence of this technology is avant-garde and is contributing to offering better medical solutions. Meanwhile, the Birmingham Children’s Hospital has deployed VR to ease children’s fear of surgery. The technology is created to help keep children calm during difficult operation procedures such as lumbar punctures, which involve inserting a needle between the bones of the lower spine. Being admitted to a hospital might be important and scary for children, but VR keeps them busy and engaged so that they can stay distracted from the pain.

VR Aids and Comforts Patients in More Ways than One

The technology offers positive experiences for hospitals, there are several studies that reveal the effectiveness of virtual reality during surgeries and other procedures. Recently, there has also been the introduction of VR therapy also alleviates chronic pain. Virtual reality plays an extensive role to help healthcare expand its boundaries and meet new opportunities that can enable healthcare providers to reach new potential and build immersive experiences for both specialists and patients.