Microsoft’s (NASDAQ:) stock has struggled over the past several months, hitting a series of fresh 52-week lows, as fears over the Federal Reserve’s aggressive plans triggered a brutal selloff in shares of many top-rated technology companies.

With a market cap of $1.79 trillion, the Redmond, Washington-based software giant is the world’s second-most valuable company, trailing only Apple (NASDAQ:).

Despite recent volatility, I remain positive on Microsoft and expect shares to bounce back in the months ahead, considering its healthy balance sheet, high free cash flows, and a highly diversified business model which has helped it withstand challenging economic times in the past.

Microsoft reported $105 billion in cash and short-term investments offset by debt of $47 billion. It generated a free cash flow margin of 33% in the last 12 months.

The tech behemoth has proven over time that it can sustain a slowing economy and still provide investors with higher payouts.

It should be noted that the 10% dividend increase is higher than the current inflation rate, which stands at 8.3%.

The new dividend, which amounts to $2.72 per share on an annualized basis, will be payable on Dec. 8 to stockholders of record on Nov. 17 offering an annual yield of 1.14%, which compares with the yield for the Technology Select Sector SPDR® Fund (NYSE:) of 0.95%.

The latest dividend hike marks the 20th consecutive year in which Microsoft has paid more in annual dividends than in the previous year, highlighting the software giant’s ongoing commitment to returning capital to shareholders. 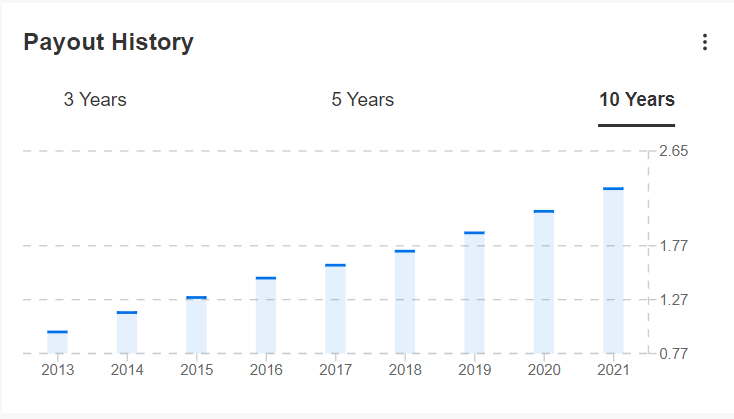 Not surprisingly, Wall Street has a long-term bullish view on Microsoft, as per an Investing.com survey, which revealed that 47 out of 50 analysts covering the stock rated it as a ‘buy,’ offering 38.4% upside potential, thanks to robust demand for its cloud-based offerings. 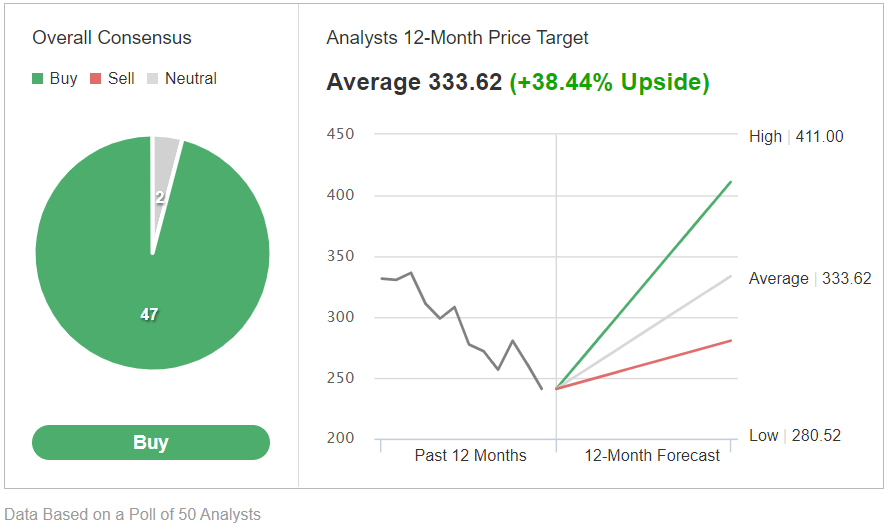 The average fair value for Microsoft’s stock on InvestingPro+ according to a number of valuation models implies a 22.3% upside from the current market value. 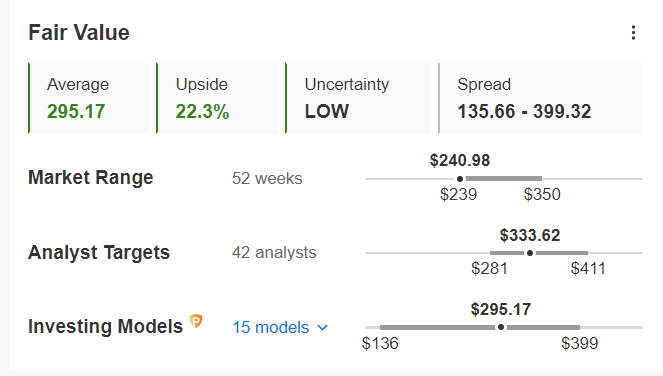 Microsoft—which missed expectations on both the top and bottom lines in the previous quarter for the first time since 2017—is scheduled to release its latest financial results after the U.S. market closes on Tuesday, Oct. 25.

estimates call for the software and hardware company to report earnings per share of $2.33 for its fiscal first quarter, improving 2.6% from EPS of $2.27 in the year-ago period.

Revenue is expected to rise 10% year-over-year to $49.8 billion, reflecting strong demand for its cloud computing products.

As such, growth in Microsoft’s booming ‘Intelligent Cloud’ unit, which includes Azure, GitHub, SQL Server, Windows Server, and other enterprise services, will be in focus.

The key segment saw sales growth of 20% in its most recent quarter to $20.9 billion, while revenue from its Azure cloud business grew 40%.

In my view, the significant pullback in Microsoft’s stock has created a compelling buying opportunity given the promising long-term demand outlook for its cloud business, software tools, and hardware devices.

The company’s dependably profitable business model and enormous cash pile have allowed it to increase its focus on returning more capital to shareholders, further enhancing its investment appeal amid the current bear market environment.

Disclosure: At the time of writing, Jesse has no position in any stock mentioned. The views discussed in this article are solely the opinion of the author and should not be taken as investment advice.