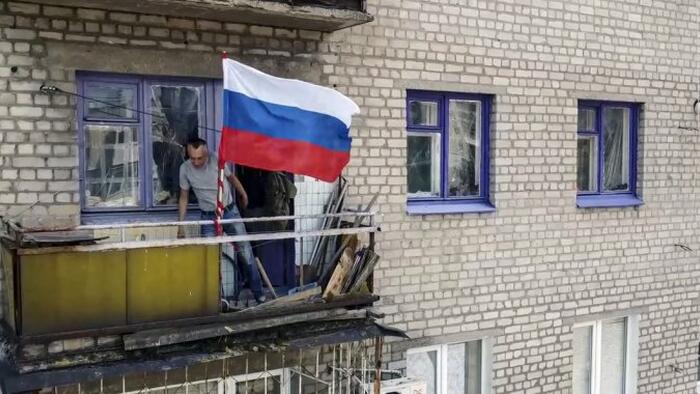 
Starting last month Ukrainian lawmakers began seeking to implement severe consequences for those participating in Russia-sponsored referendums in occupied territories of Ukraine. For example, a law is being pushed through parliament which criminalizes obtaining a Russian passport in temporarily occupied territories, Ukrainian sources reported last week, according to Yahoo News.

Proposed possible punishments have included losing Ukrainian citizenship, or even lengthy jail sentences. But other officials have argued for a more compromising approach given the necessity of survival in occupied areas. But now the Ukrainian government has reiterated its willingness to impose steep penalties for even participating in any Kremlin-sponsored vote to join the Russian Federation.

Ukraine has responded by warning its citizens that any official who promotes or organizes the voting faces a “prison term of five to ten years” – as well as possible asset seizure by the state, and being barred from employment in select positions for up to 15 years.

Ukrainian Deputy Prime Minister Irina Vereshchuk announced this week that a five year prison term is currently being considered for anyone caught participating in “sham referenda” by government authorities:

“Some lawyers believe that those actions fall under Article 110 part 1 of the Criminal Code of Ukraine, ‘Infringement on Ukraine’s territorial integrity,’ punishable with a prison term of up to five years,” she told the Strana portal on Tuesday.

She further called on citizens currently in occupied to territories to “leave, if possible.”

Vereshchuk was cited further as follows according to a Russian media translation of her words:

“This [may] mean imprisonment for up to five years. So, once again I strongly advise residents of the temporarily occupied territories: do not take a [Russian] passport, do not go to referendums, do not cooperate with the occupiers and leave, if it’s possible,” the official stated.

Below is what a law proposed last week in Ukrainian parliament stipulates:

But the important distinction was added: “The Ministry of Reintegration of the Temporary Occupied Territories noted that obtaining a Russian passport in the temporarily occupied territories is justified only if a person thus tries to return to the territory controlled by Ukraine through Russia and third countries,” according to a Ukrainian report republished in Yahoo.

More than 30% of Canadians plan to purchase crypto by 2024, says OSC head