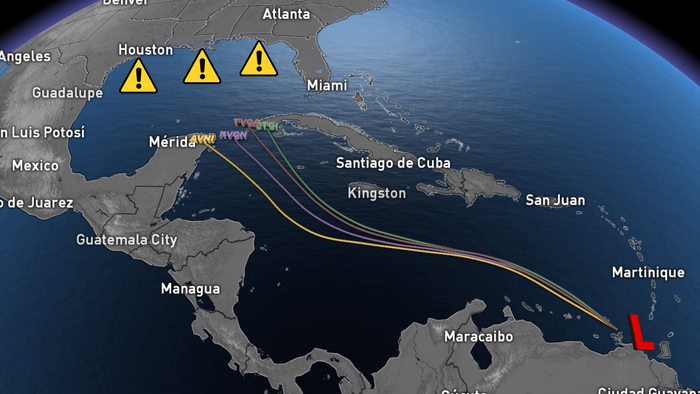 
About a month into the 2022 Atlantic hurricane season, we noted the threat of tropical disturbances could wreak havoc on oil/gas operations in the Gulf of Mexico and send gasoline prices higher. Well, July and August passed with barely any named storms. Enter the second half of September, a week past the peak of hurricane season, the tropics seem to have woken up, and a new disturbance could spell trouble for the Gulf area.

As of Thursday morning, Hurricane Fiona is the strongest hurricane of the Atlantic season and is barreling towards Canadian Maritimes as a Category 4 storm, but new forecast models show a disturbance with high chances of becoming the next tropical storm — named Hermine — in the next 48 hours (located in the southeastern Caribbean Sea) could quickly intensify and become a major hurricane next week, with landfall impacts possibly somewhere along the eastern Gulf coast or the Florida Straits.

“The fact that nearly every computer model out there develops this into a westward-moving hurricane is absolutely concerning,” CNN meteorologist Chad Myers said.

“But yes, it’s something that we are keeping an eye on and that we are closely monitoring as we get into the weekend and early next week,” Torres said.

Torres said conditions in the Gulf are favorable for the system to “strengthen, and it will do that very rapidly.”

We are closely monitoring a tropical disturbance near South America. It has moved into the Caribbean and is expected to organize.

AccuWeather meteorologists published a model of the storm’s potential path through next Thursday.

“At this early stage, US interests from Miami to New Orleans should closely watch the evolution of this system,” AccuWeather Lead Long-Range Meteorologist Paul Pastelok.

Even though there’s a lot of uncertainty on the actual path of the disturbance over the next week, let’s say the meteorologists are right, and it does intensify into a hurricane next week and sets sights on the Gulf Coast of the US. Then this could be very problematic for major US oil/gas assets in the region and comes at a time the Biden administration has drained the SPR to decade-low levels to crush gasoline and diesel prices ahead of the midterm elections.

As outlined in the map below, here are major oil refineries in the region (read this: Activity In Tropics Emerges As Next Big Hurricane Could Send Gas Prices To “Apocalyptic” Levels).

This is something to keep an eye on through the weekend.