traders had a wild ride in Wednesday’s trade after the US Federal Reserve Fed hiked another jumbo 0.75%, making it the third hike in a row for the US central bank. The yellow metal sold off after the announcement. Gold bulls and bears might be duking it out, depending on their focus. Gold is considered to be an hedge but the is becoming increasingly attractive as its yield increases.

The Fed clarified that it would keep raising rates “until the job is done,” signaling the possibility that even a recession will not stop it as it remains focused on achieving price stability.

After its historic miscalculation on inflation last year, saying it was “transitory,” the Fed may now have a chip on its shoulder which makes it defensive to any suggestion that it is not taking inflation seriously enough.

Today, gold is climbing for the second day, suggesting inflation-hedgers are winning, although Putin’s increased aggression against Ukraine may also have played a part in the haven’s rising demand. However, I think this rise is almost certainly temporary.

If we are to trust the bond market, it appears that the interest rate theme is overshadowing inflation. The Treasury yield surged past 4.1%, its highest level since 2007 as bondholders sold off underlying Treasuries, expecting that continuously rising rates would diminish current bond yields.

Now, let’s look at the chart to understand why gold is rising.

The first thing that hits the viewer is that the precious metal is in a long-term downtrend, where the buying and selling limits are marked in a falling channel. Note how the initially shorter boundary’s (dotted line) resistance turned to support. However, I’m not keen to widen the channel to include the August high after gold posted a new low, extending the track.

Gold completed a rising flag from Aug. 31 to Sept. 13, a period when early bears cover, buying back the instrument from newer bears. After the short squeeze was over, the flag broke to the downside, extending the downtrend, especially after posting a new low below July 21. The flag pole measures the price’s target, the sharp drop preceding the flag, and is $79.70. Given that the flag breakout point was $1,710, it targets $1,630.3.

If that scenario plays out, it suggests that the current congestion, another continuation pattern, will also complete with a downside breakout. The pennant’s implied target by the same method as the flag is an $84.50 drop from the point of escape, retesting the $1,600 levels. 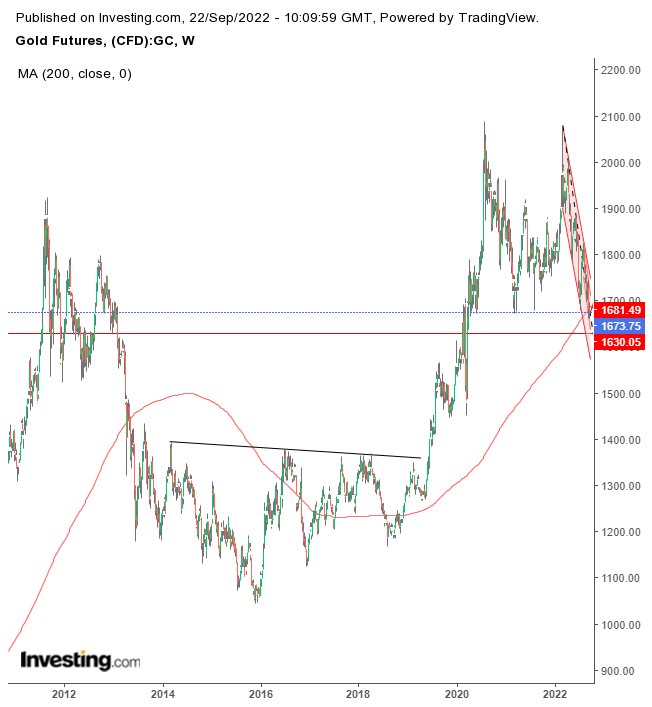 However, if this technical chain of events plays out it will complete a much more significant pattern—a giant double top, between August 2020 all-time high and the March 2022 peak. Note that the weekly price is trading below its 200-week moving average (MA). That also happened in 2016 and 2018. However, since the price created a bottom—and fundamentally the dollar did not yield—there was no significance to these crosses.

Conversely, gold plunged 28% in 2013, ending a 12-year bull run, as investors unwound hedges against the weaker dollar when the Fed was purchasing bonds to increase inflation. The price fell below the 200 daily MA that April, and despite already losing 25% since its September 2011 then-all-time high, it plummeted 18% in the following 11 weeks and as much as 27% since crossing the 200 daily MA until it bottomed in November 2015.

Conservative traders should wait for the pennant to complete, then confirm its integrity with a return move.

Moderate traders would wait for the return move, just for a closer entry to resistance, not necessarily for additional confirmation.

Aggressive traders could short like moderate traders or from the pennant’s top.

Disclaimer: At the time of publication the author had no positions in the stocks mentioned.