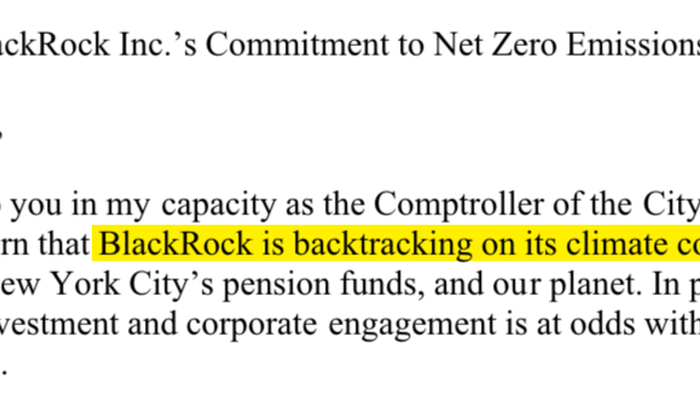 
New York City Comptroller Brad Lander outlined in a letter to BlackRock CEO Larry Fink, one of Wall Street’s biggest advocates for ESG, that he is becoming increasingly concerned the latest investment actions of the bank do not align with its climate commitments.

Lander, which oversees NYC’s pension funds (Teachers’ Retirement System, New York City Employees’ Retirement System, and the Board of Education Retirement System), managing $43 billion of their investments, penned a letter to Fink on Wednesday about the firm’s “recent efforts to tout its investments in oil and gas in response to Republicans, who have criticized the firm for its advocacy of sustainable investing,” according to Bloomberg.

“BlackRock has repeatedly and rightly recognized climate change as an investment risk. In your 2020 letter to CEOs, you name climate change as a “defining factor in companies’ long-term prospects,” and declared your “investment conviction that sustainability- and climate-integrated portfolios can provide better risk-adjusted returns to investors.” Your 2021 letter to CEOs committed to “supporting the goal of net zero greenhouse gas emissions by 2050 or sooner“—in line with BlackRock’s pledge as a signatory to the Net Zero Asset Managers Initiative (NZAMI)—and asked businesses to disclose how they are integrating their own net-zero plans into their long-term business strategies.

“Unfortunately, despite these repeated proclamations, in its September 6 response to the attorneys general, BlackRock now abdicates responsibility for driving net zero alignment in its own portfolio by saying that it does not ask companies to set specific emissions targets, and that its participation in NZAMI does not mean BlackRock is setting or meeting any net zero targets. BlackRock even goes so far as to tout its continued investment in fossil fuels—without specific net zero targets or commitments or any plan for a phased transition away from the very investments that increase carbon emissions—as somehow a necessary part of a transition to a green economy. A net zero goal that is not backed by a firm commitment to follow through is at odds with the path our economy must take to limit global temperature rise below 1.5°, or even 2.0°C.

“The fundamental contradiction between BlackRock’s statements and actions is alarming. BlackRock cannot simultaneously declare that climate risk is a systemic financial risk and argue that BlackRock has no role in mitigating the risks that climate change poses to its investments by supporting decarbonization in the real economy. As a fiduciary cognizant of the risks of inaction, BlackRock must demonstrate a plan to use its position as the world’s largest asset manager, with all the corporate governance responsibilities that go along with that position, to move its portfolio companies to get their businesses in line with a net zero economy,” Lander wrote in the letter.

“That’s why we will be prudently reassessing our business relationships with all of our asset managers, including BlackRock, through the lens of our climate responsibilities.”

What’s amusing about Lander’s letter is that it criticizes Wall Street’s top ESG player. It also comes as the world faces a historic energy crisis that renewable energy (wind and solar) fossil fuels are saving power grids worldwide from collapse.

Lander’s energy transition view is that it’s a straight line from here. Perhaps he should reevaluate those views.