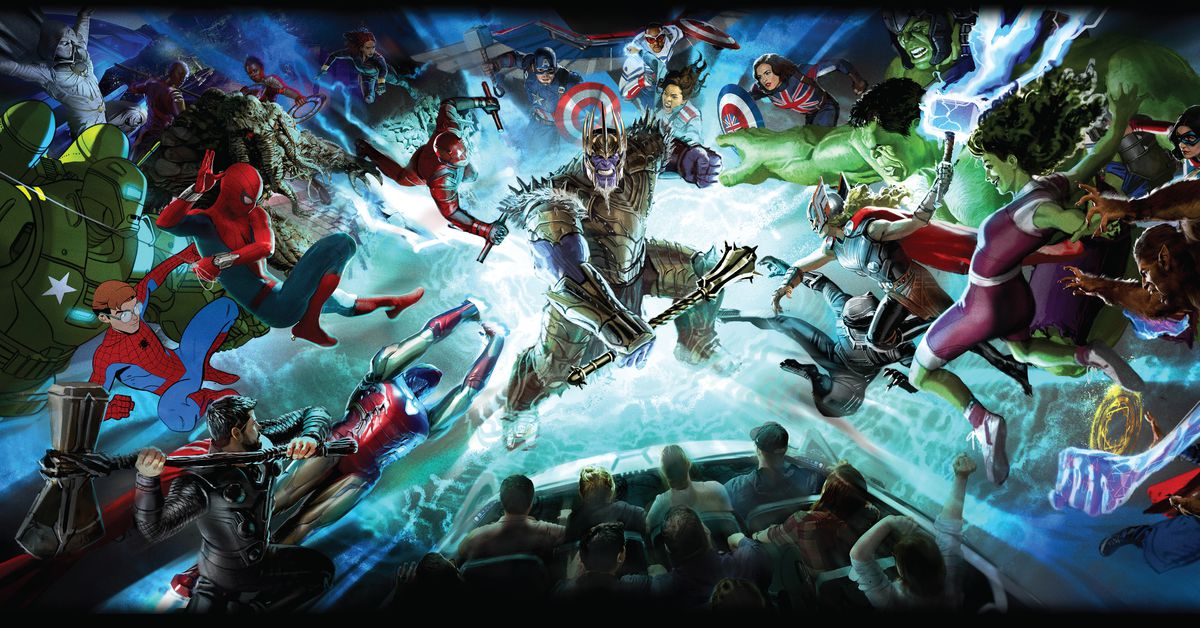 
Sunday, the last day of the 2022 D23 Expo, saw a major deluge of parks and experiences news. At the park-specific panel, Disney announced some exciting things coming to theme parks around the world. While the Disneyland Resort in California and Walt Disney World in Florida will get revamps in the next few years, there’s a lot going on beyond the U.S., where the parks have grown nearly as big as land allows. This includes three separate Frozen-themed lands.

Now to be fair, a lot of the news out of this panel isn’t super new. But as previously announced opening dates have shifted (thanks pandemic!), some plans have been swapped out and others rejiggered.

Here’s a roundup of all the new opening dates and freshly announced attractions coming to Disney parks worldwide over the next few years.

California Adventure’s Avengers Campus will be getting a third brand-new ride, which will take place in the middle of a multiverse-spanning battle. This is in addition to the still-to-open Wakanda-themed attraction. The yet-unnamed multiverse ride will feature King Thanos for the very first time in the MCU. There is no date for when this will open, and considering the second Avengers Campus attraction is still in progress, it likely won’t be for some time.

Mickey and Minnie’s Runaway Railway coming to California in 2023

The Orlando version of Mickey and Minnie’s Runaway Railway replaced Hollywood Studios’ The Great Movie Ride in early 2020. The Disneyland version was supposed to open this year in Toontown, but it was delayed to early 2023.

Pacific Wharf will get a Big Hero 6 makeover

The San Francisco-themed area of California Adventure will be rethemed as San Fransokyo, the futuristic city as seen in Big Hero 6. This area will include a meet-and-greet with health care companion Baymax and teenage genius Hiro. There is no set date for when this makeover will be finished.

The long-overdue makeover of the controversial Splash Mountain attraction will open in late 2024. Coming to both Disneyland and Disney World, Tiana’s Bayou Adventure takes place after the events of The Princess and the Frog and follows princess and restaurant owner Tiana as she journeys to the bayou, inviting guests to a Mardi Gras celebration. The revamp was announced in the summer of 2020. Much of the original voice cast — including Anika Noni Rose as Tiana and Bruno Campos as Naveen — returns to voice the ride.

Epcot’s next phase will be complete in 2023

Three years ago, at 2019’s D23, Disney announced big changes coming to Orlando’s Epcot park. And in 2023, many of those big overhauls will finally be complete. This includes the retheming of the opening area, now called World Celebration, and the opening of the Moana-inspired Journey of Water. Additionally, fan-favorite parks character Figment the dragon will be getting his own meet and greet.

The Tron Lightcycle ride will open in Disney World’s Tomorrowland in 2023. And a meet-and-greet with the Haunted Mansion’s Hatbox Ghost will also debut in 2023.

Three parks worldwide will be getting Frozen-themed expansions.

The previously announced Frozen land for Hong Kong Disneyland will open in late 2023. And now, a Frozen-themed land will come to Disneyland Paris, alongside a Tangled-themed attraction. Frozen’s presence in Tokyo Disney Resort will be a little different; instead of a full-fledged land, it will be integrated into the Fantasy Springs expansion alongside Tangled and Peter Pan.

Additionally, the Zootopia expansion coming to Shanghai Disneyland is still underway, though it does not have an opening date just yet.

The Disney Treasure will set sail in 2024, immersing guests in an adventure-themed setting inspired by Asia and Africa — as well as the fantasy land of Agrabah, from Disney’s Aladdin. The main statue at the center of the atrium will feature Aladdin, Jasmine, and the Magic Carpet.

Before that, however, Disney cruise lines will offer limited-time engagements in Australia and New Zealand in late 2023, as well as launch the line’s first South Pacific voyages.

The Walt Disney Company turns 100 next year, and it wouldn’t be complete without a big parks-wide celebration. Two new fireworks shows will hit Disneyland Resort in Anaheim: World of Color — One, a revamp of the popular World of Color fireworks show, will debut in California Adventure, while Wondrous Journeys, a show that pays homage to all 60 Disney theatrical animated features, takes to the sky in Disneyland. Additionally, the popular Magic Happens parade will return next year.

Meanwhile, Epcot will be getting a new show in late 2023, though the specifics have not been announced. And Hong Kong Disneyland will get a brand new statue of Walt and Mickey.

And some exciting speculation about the distant future…

At the presentation, Disney showed off some concept art for tentative ideas. One was an Encanto and Coco-themed area in the space beyond Big Thunder Mountain Railroad in Disney World’s Frontierland, and an alternate version imagined a land run amok with Disney Villains instead.

Another theoretical revamp involves Zootopia and Moana rebranding in the outdated Dinoland U.S.A. section of Animal Kingdom. The Zootopia integration appeared pretty straightforward, but the Moana one would theoretically feature “creatures from the deep.” All of this was thrown out to D23 viewers as a big “What if?” meaning reactions might be steering more of Disney’s plans than ever before.