Last week, we saw volatility pick up on Wall Street as retail traders repriced expectations of a 2023 Federal Reserve pivot. This resulted in investors changing their Dow Jones and S&P 500 exposure. They went from selling equities to increasingly buying them. As a result, IG Client Sentiment (IGCS) warned that further losses might have been in store. IGCS tends to function as a contrarian indicator, and last week’s outlook came true. Will volatility remain elevated ahead? Check out the recording above for a deeper dive.

The IGCS gauge shows that about 53% of retail traders are net-long the Dow Jones. Since most traders are biased to the upside, this warns that prices may continue falling. Net-long bets have also increased by 1.59% and 22.28% compared to yesterday and last week, respectively. With that in mind, the combination of current sentiment and recent changes is offering a stronger bearish contrarian trading bias.

Dow Jones futures have extended losses ever since reinforcing the falling zone of resistance from the beginning of this year. On Tuesday, prices closed under the 50-day Simple Moving Average (SMA). Confirmation is lacking at this time, but further downside progress could hint at more weakness to come. Such an outcome would place the focus back on lows from June (29639 – 29869). Immediate resistance seems to be the 38.2% Fibonacci retracement at 32486. 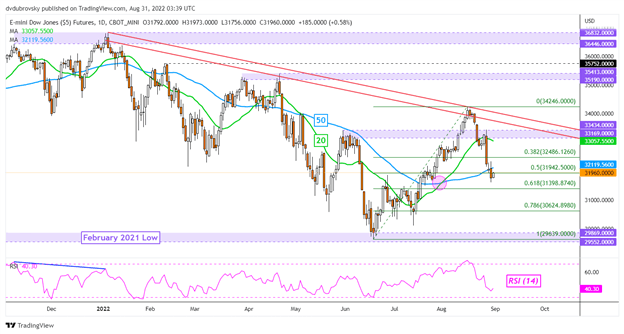 The IGCS gauge shows that about 44% of retail traders are net-long the S&P 500. Since most traders are still short, this hints prices may rise. But, upside exposure has increased by 4.06% and 5.73% compared to yesterday and last week, respectively. With that in mind, recent changes in sentiment warn that the S&P 500 may continue on its current path lower. 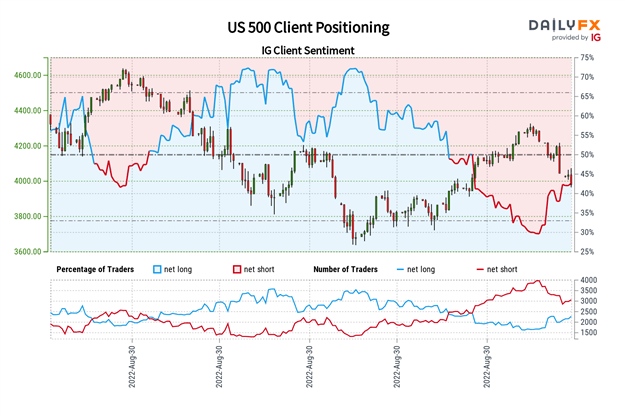 Similar to the Dow Jones, S&P 500 futures have also closed under the 50-day SMA. This followed a turn lower on the falling trendline from January. Confirming the breakout under the SMA could open the door to extending losses. Immediate support appears to be the 61.8% Fibonacci retracement at 3902. Soon after that, the June low at 3639 will come into focus. On the flip side, keep a close eye on 4064. That is the 38.2% retracement which appears to be immediate resistance. 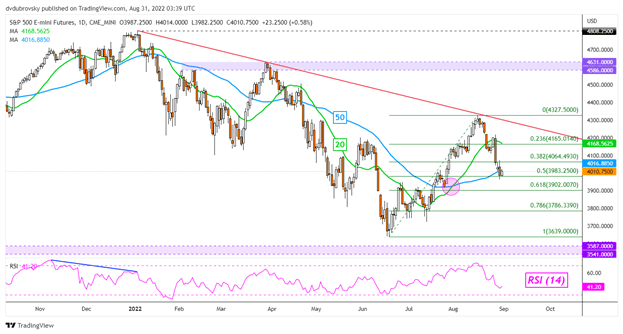