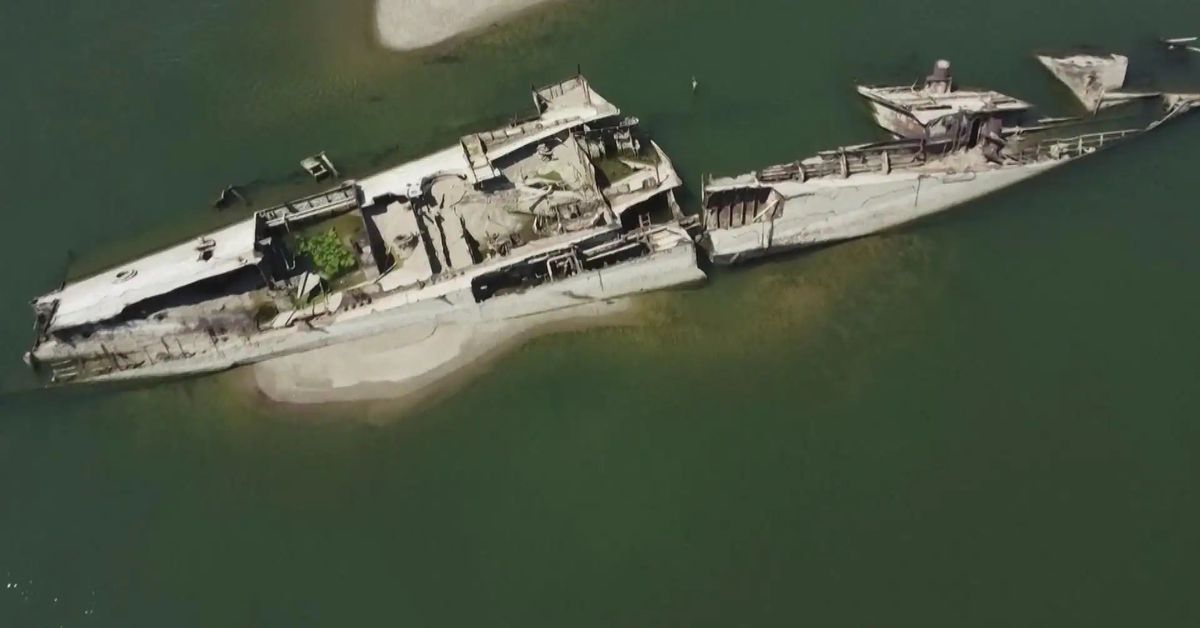 
Drought conditions around the world are so extreme this summer that rivers are drying up, exposing previously inaccessible or undiscovered relics. This week, the treasures include a bevy of Nazi ships, an entire lost island, and dinosaur tracks.

A fleet of over 20 wrecked Nazi warships laden with explosives has been exposed near Prahovo in eastern Serbia as water levels fall in the Danube, Europe’s second-longest river. The ships had remained undisturbed on the riverbed for almost 80 years and are believed to be among hundreds that formed a flotilla between Nazi Germany and the Black Sea Fleet in 1944. When escaping from the Red Army’s advancements became impossible, the entire fleet was intentionally sunk to prevent them from falling into Soviet hands.

The tons of ammunition and explosives still onboard the wrecks pose a threat to modern shipping routes, local resident Velimir Trajilovic told Reuters. “The German flotilla has left behind a big ecological disaster that threatens us, people of Prahovo.”

Some of the wrecks have reduced navigation around this section of the Danube to 330 feet, down from 590 feet when water levels are as they should be. The estimated cost given to the Serbian government to salvage the ships and remove the dangerous explosives in March of this year is estimated to be around €29 million ($30 million USD).

Meanwhile, over in China, water levels in the Yangtze River have revealed an entire island that was previously submerged. Three Buddhist statues believed to be around 600 years old according to a report from state media Xinhua sit at the highest part of the island known as Foyeliang.

Rainfall has fallen by around 45 percent in the Yangtze basin since July. Reports from across the country estimate that as many as 66 rivers within the Chongqing municipality have dried up due to the most extreme heatwave seen in the region in six decades. The drought has also caused a loss of water to the hydropower system, resulting in authorities in Sichuan limiting electricity to thousands of factories, including Toyota, Tesla, and Foxconn, in an effort to “leave power for the people.”

Nazi fleets and Ming dynasty statues are recent history compared to the monuments currently drying out in Spain. A rare megalithic monument dating back to between 2000 and 3000 BC has fully emerged from the Tagus River. Known locally as the Dolmen of Guadalperal, this historic site is also dubbed the “Spanish Stonehenge” for its resemblance to the much more famous site in England.

The site was originally discovered back in 1926 and subsequently flooded in 1963 as part of a rural development project under Francisco Franco’s dictatorship. It has only been fully visible four times in the almost 60 years since its flooding. Archaeologist Enrique Cedillo from Madrid’s Complutense University told Reuters, “It’s a surprise, it’s a rare opportunity to be able to access it.”

While the drought presents an unexpected research opportunity, it’s a faint silver lining to a very dark cloud. A study published by the Nature Geoscience journal reveals that this is the driest climate faced by the Iberian Peninsula in 1,200 years, devastating local crops and livestock for local farmers.

The oldest discoveries to have emerged from a dried-up riverbed this week are some beautifully preserved dinosaur footprints discovered in the aptly named Dinosaur Valley State Park near Fort Worth, Texas. The fossils are believed to be around 113 million years old and belong to an Acrocanthosaurus, a 15-foot-tall predator that walked on two legs.

As Park spokesperson Stephanie Salinas explained in an interview with CNN, “Due to the excessive drought conditions this past summer, the river dried up completely in most locations, allowing for more tracks to be uncovered here in the park. Under normal river conditions, these newer tracks are under water and are commonly filled in with sediment, making them buried and not as visible.”

Droughts have only become more frequent as the world continues to heat up, to devastating effect. Wildfires and droughts have been reported across China, and the Global Drought Observatory reports that two-thirds of Europe is currently under a drought warning, facing the worst event of its kind in 500 years. More discoveries like these are sure to emerge as water levels hit record lows around the world and climate disasters continue to pile up.