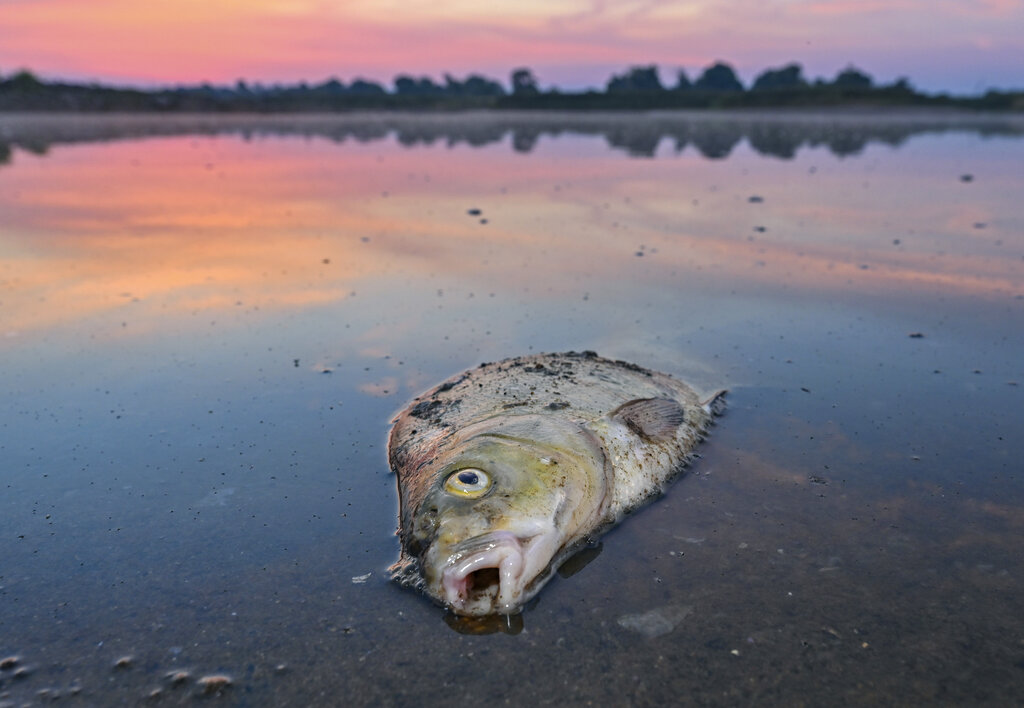 Several substances seem to have contributed to the massive fish die-off in the Oder River that forms much of Germany’s border with Poland, a German official said Monday.

“The search for the causes of the fish die-off in the Oder still haven’t been completed,” said Andreas Kuebler, the ministry spokesman. “So far we have several organic and inorganic substances that could be responsible.”

“It seems to be a cocktail of chemicals,” he told reporters in Berlin. “According to our information so far, none of these substances alone led to the fish die-off. It must still be assumed that this could be a multi-causal incident.”

Kuebler said a type of algae that normally grows in brackish water and produces a substance toxic to fish may also have played a role in the disaster.

Recent lab results showed a sharp growth of Prymnesium parvum in the Oder that could only have resulted from increased salt levels caused by an “industrial discharge,” he said.

Dead fish in the Oder were first noticed by fishermen in southwestern Poland in late July, but German authorities said they weren’t officially notified by their Polish counterparts until the second week of August. Poland’s government is trying to track down those responsible. Ten tons of dead fish have been removed from the river.

Warsaw lashed out over the weekend, with Environment Minister Anna Moskwa accusing Germany of spreading “fake news” about the levels of pesticides in the river.

“In Poland, the substance is tested and detected below the quantification threshold, that is, it has no effect on fish and other species,” she wrote on Twitter.

Kuebler said Germany was “surprised and a bit saddened” by the claim.

“We never said that the Polish side is responsible for the use of pesticides (and) that fish died of this,” he said.

In Poland, where more than 100 tons of dead fish have been removed from the river, the prime minister has called the die-off an environmental “catastrophe.”

Photograph: A dead fish lies in the shallow water of the German-Polish border river Oder in Lebus, Germany, on Thursday, Aug. 18, 2022. Germany says several substances have contributed to a massive fish die-off in the Oder River that forms much of the country’s border with Poland. Photo credit: Patrick Pleul/dpa via AP