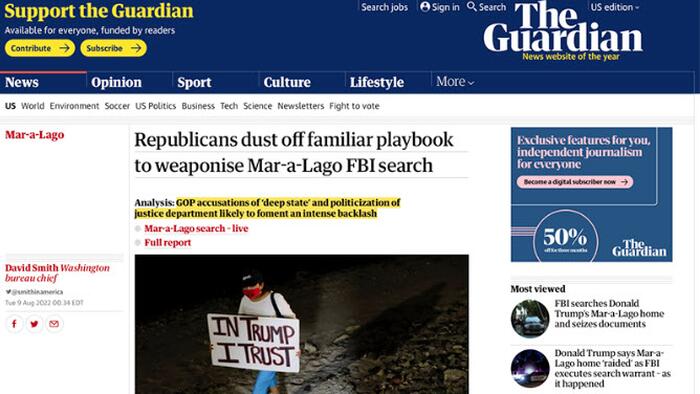 Following the news of the FBI raiding President Trump’s home, The Guardian suggested that REPUBLICANS are ‘weaponising’ the situation to make unfounded claims of a deep state and a politicised justice department.

The leftist newspaper’s headline reads Republicans dust off familiar playbook to weaponise Mar-a-Lago FBI search, with a sub headline of GOP accusations of ‘deep state’ and politicization of justice department likely to foment an intense backlash.

So the FBI, under Democrat guidance, break into a former President’s home and ransack through his belongings and it’s somehow the GOP that is responsible for the ‘weaponising’.

The article quotes several Democrats waxing about how ‘justice is being served’, and then claims that Republicans are engaging in “florid rhetoric” that will “enflame America’s political divisions” and encourage Trump supporters to further point to a “deep state conspiracy”.

Armed federal agents in the dead of night cracking open a former President’s safe in an attempt to steal documents. Nothing Deep Statey or conspiracy like about that is there.

The piece concludes by quoting ‘never Trumper’ Joe Walsh who tweeted “The Republican Party has abandoned the rule of law. Just listen to them tonight. They’re at war with the rule of law.”

Who is at war with the rule of law?

As several Trump allies noted, the rule of law seems to be AWOL when it concerns Hillary Clinton or Hunter Biden:

Executing a warrant against ex-POTUS is dangerous. The apparent political weaponization of DOJ/FBI is shameful. AG must explain why 250 yrs of practice was upended w/ this raid. I served on Benghazi Com where we proved Hilliary possessed classified info. We didn’t raid her home

The FBI raid on former President Trump’s home is unprecedented and highly concerning. If the FBI is looking for classified info or incriminating evidence, they should start with Hunter Biden’s laptop. #Demdoublestandard

Absolute power corrupts absolutely. Countless times we have examples of Democrats flouting the law and abusing power with no recourse, including Hunter Biden. Democrats continually weaponize the bureaucracy against Republicans. This raid is outrageous.

The shocking raid of Donald Trump’s home at Mar-a-Lago, Florida, stands in stark contrast to the many Trump opponents that the FBI has not raided despite public evidence of alleged misconduct. @joelpollak’s latest: https://t.co/jpgMipncyo

In the age of mass Silicon Valley censorship It is crucial that we stay in touch.  We need you to sign up for our free newsletter here. Support our sponsor – Turbo Force – a supercharged boost of clean energy without the comedown. Also, we urgently need your financial support here.