Gold prices are up over 1.5% since the start of August against the US Dollar, putting XAU/USD on track to record its first monthly gain since March. After falling to their lowest level of 2022 last month, prices began rising and are currently tracking to see a fourth consecutive weekly gain. That would be the longest weekly winning streak since August 2021.

Are bullion prices set to rise further? Examining the rally’s catalyst may help answer that question. The market started to pull back on Federal Reserve rate hike bets in July, with traders betting that the FOMC would be forced to stop its rate-hike cycle earlier than expected. That weighed on real yields and the US Dollar, boosting gold’s fundamental position as a non-interest-bearing US Dollar-denominated asset.

That caught gold traders off guard. Short positions among speculators were at the highest level since November 2018 for the week ending July 26, according to CFTC data. As prices rose, those short positions fell, dropping 23.3% in the following week that ended on August 2. That suggests a short covering event that may help prices rise further as traders buy back their borrowed contracts, pushing prices higher in the process.

Federal Reserve officials have pushed back on the market’s 2023 pivot thesis, but the central bank has already increased rates by more than 200-basis-points, and the pace of tightening is set to decrease after the September meeting. Rate traders are leaning towards a 75-bps hike for the September 21 FOMC, although a 50-bps increase is on the cards. After that, however, the Fed’s pace is seen slowing.

The US consumer price index (CPI) due tonight presents a risk to gold bulls. Analysts see July’s CPI print dropping to 8.7% from 9.1% y/y, which would show that rate hikes are working as intended. A hotter-than-expected number could rekindle hawkish rate hike bets. Even so, with an aggressive front-loaded policy response from the Fed, it would likely take more than a modest beat to materially alter the Fed’s path. That said, gold looks poised for further gains. 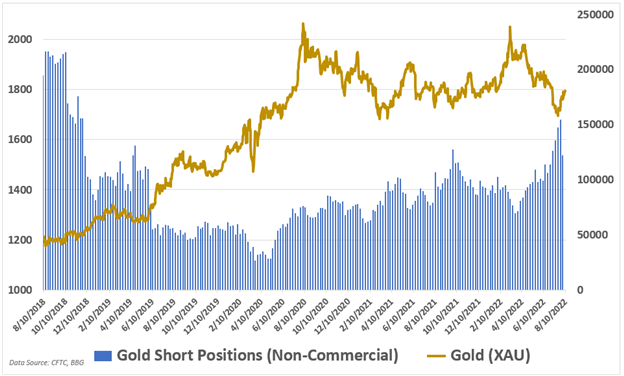 XAU is slightly lower after prices failed to clear the 18000 psychological level during New York trading. The recently breached 50-day Simple Moving Average (SMA) may underpin prices. MACD and RSI have moderated but remain above their respective midpoints. A break above 1800 would expose the 78.6% Fibonacci retracement. A move lower and the 38.2% Fib shortly below the August low would come into focus.