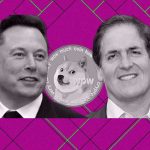 Everyone is very well aware of Elon Musk’s undying love for meme crypto Dogecoin. But he is not only the one who finds DOGE fascinating. Recently, Mark Cuban an American billionaire entrepreneur, television personality, and media proprietor joined the Altcoin Daily Podcast for a wide-ranging, hour-long conversation about crypto.

“I still think DOGE has got more applications potentially available to it than Cardano,” Cuban said, adding that he believes the opportunity for Cardano is greater—at least until Dogecoin also becomes a platform for applications.

“It’s still a business,” he said. “No matter what you do, what you say, how you position it, or what your market cap is, there has to be some there, there.”

Dogecoin was created to be the ultimate crypto meme, but the world’s richest man takes it very seriously.

The world’s richest man and CEO of Tesla, Elon Musk, is a well-known Dogecoin supporter, but in a recent interview on the Full Send Podcast, the said that the Dogecoin blockchain had a much greater transactional capacity than Bitcoin.

He also pointed out that DOGE can currently be used not only to buy merchandise at Tesla and SpaceX but as a means of payment at other large companies such as The Boring Company, which offers subway transportation services in Las Vegas.

The post Dogecoin gets One more Fanatic: Mark Cuban after Elon appeared first on .