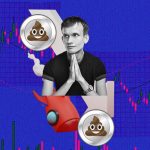 SHIT tokens can invite a crypto crash: Thanks to Vitalik Buterin’s major decision in 2022

It is indeed a stormy scene in the crypto market. One after another developments is taking place through crypto but none of them are for the good of the crypto market. One of the latest concerns, emerging from the information provided by PeckShieldAlert, is the Ethereum founder-boss Vitalik Buterin’s act of selling no less than 25 trillion SHIT tokens. These SHIT tokens were ‘airdropped’ (read, donated) approximately two months back. What happened, as a result, was absolutely expected: the price of the token dropped to the extent of 40 percent.

Airdrops have become a sort of normal practice in the crypto market. It is the sending of free tokens to active investors with a minimum balance of a certain cryptocurrency in the wallet. Even with a minimal amount of 0.1 Ethereum crypto in the wallet, one can be the target of the airdrop. Much of it is done with a promotional motive. In most cases, airdrops are used as part of the new coin listings in the market. A few of them pay out real money to sign up with an account. Experts point out that selling airdrops may bring in profit and in some cases the profit may reach an enviable degree. However, there is always a chance that unsuspecting investors will receive some bits of Bitcoin or any other cryptocurrency for that matter, which is widely known as ‘dusting’ with a negative connotation.

The Ethereum creator incidentally has been a ‘victim’ of airdrop with a high frequency and the amount he dumped is proof of the fact. While his earlier statements reflect that he was not happy with the ‘scam’, the act of dusting it is also true. Last year when he was gifted with 50 percent of the total SHIB supply what he did was dump as much as 90 percent of those tokens which were valued at US$32.5 billion.

Vitalik is in the news for expressing his concern with the ongoing downturn in the crypto market. Being arguably the most powerful man in the crypto market he is seeking ways and means to effectively tide over the crisis. Time magazine in its March-April issue this year has put him on the cover with the caption ‘The Prince of Crypto has Concerns’. Whether cleansing 25 trillion SHIT coins from his crypto wallet for a paltry amount of US$33,000 makes him relieved is a billion-dollar question by itself.