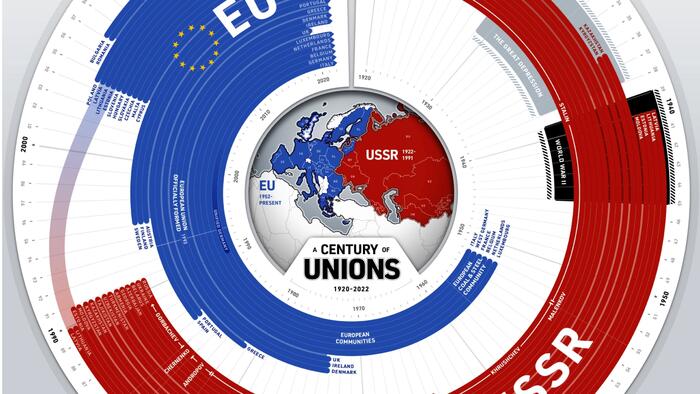 
On February 24th, Russia invaded Ukraine launching one of the biggest wars on European soil since World War II. The invasion reflects a longstanding belief of Russia’s that Ukraine – and much of the Soviet Union’s former republics and satellite states – is still their territory to claim. But what is the “former glory” of Russia?

As Visual Capitalist’s Avery Koop and Harrison Schell detail below, of the USSR’s former republics and satellite states, many have moved on to join the European Union, and in Putin’s eyes have become more “Westernized” and further from Russian values. In fact, Ukraine recently had its candidacy status approved with the EU.

It’s now been a full century since the formation of the USSR. Much has changed since then, and this visual timeline breaks down how countries within and near Europe have aligned themselves over those 100 years.

In the above visual, Soviet satellite states are not shown as a part of the USSR, as they were never formal republics. Candidate countries still in process to join the EU are not shown.

The Soviet Union—officially titled the Union of Soviet Socialist Republics (USSR)—was formed 100 years ago in 1922 and was dissolved in 1991 almost 70 years later. At its height it was home to 15 republics, over 286 million people, and stretched from the Pacific Ocean to Ukraine, with virtual control and influence in countries as far west as East Germany.

Notable leaders characterized both the rise and fall of the USSR, starting with its establishment under Vladimir Lenin until the union’s dissolution under Mikhail Gorbachev. Latvia and Lithuania were among the first republics to make the move for sovereignty, beginning the demise of the Soviet Union.

Here’s a look at which modern day countries were a part of the USSR.

Additionally, there were multiple satellite states, which were not formally joined with the USSR, but operated under intense Soviet influence.

Today, there are still some countries that align themselves with Putin and Russia over the EU.

Belarus, sometimes called Europe’s “last dictatorship”, shares a border with both Ukraine and Russia and facilitated the entry of Russian soldiers into Ukraine. Furthermore, according to the Pentagon, Russian missiles have been launched from Belarus.

The European Union was officially formed in 1993 and has 27 member states. Some former USSR republics are now a part of the union including Estonia, Latvia, and Lithuania. The most recent member to join was Croatia in 2013.

The EU has its roots in the European Coal & Steel Community which was formed in 1952 with Italy, France, West Germany and a few other countries comprising its first members. There are currently six candidate countries on track to join the EU — all but one were either former Soviet satellite states or formal republics:

There are many reasons countries opt to join the EU: a common currency, easier movement of goods and people between national borders, and, of course, military protection.

However, in 2020 the UK formally left the union, making it the first country in history to do so. Here’s a look at every EU member state.

The iron curtain that was draped across Europe, which used to divide the continent politically and ideologically, has since been drawn back. But the war in Ukraine is a threat to many in Europe, and countries such as Poland have voiced fears about the spillover of conflict.

In late June, the European Council approved Ukraine’s bid for expedited candidacy to the EU, but the process will still likely be lengthy—for example, it took Croatia 10 years to formally join at the normal pace.

Beyond other needs such as military support, joining the union would allow refugees from Ukraine the freedom to migrate and work in other EU countries with ease.