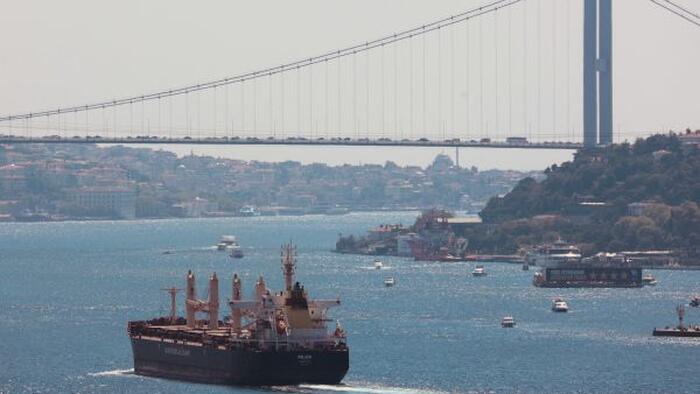 This as the Razoni cargo ship which was the first to depart Odesa carrying 27,000 tonnes of corn last week, is making its way to the Lebanese port of Tripoli, though not on time. The latest series of ships departed the ports of Odesa and Chornomorsk on Sunday, and their sailing has given rise to greater hopes of export stability, BBC reports, as millions in Ukraine-grain dependent countries are facing famine conditions.

Two of the vessels are reportedly bound for Italy, while the other pair are going to China, after they are expected to dock in Turkey for international inspections under the terms of the UN safety corridor deal. In total they’ve been estimated to be laden with 160,000 tons of corn and other foodstuffs.

The BBC writes, “Ukrainian authorities say there are good signs that the grain exports are safe, and have urged companies to return to the country’s ports.” And further: “The hope is that the exports will help ease the global food crisis while bringing in much needed foreign currency.”

And according to further details in NBC, referring to the Joint Coordination Center in Istanbul, “The JCC said late on Saturday it had authorized the departure of a total of five new vessels through the Black Sea corridor: four vessels outbound from Chornomorsk and Odesa carrying 161,084 metric tons of produce, and one inbound.”

Last week, Ukrainian President Volodymyr Zelensky visited Odessa port to oversee the departure of the first grain ship under the UN deal, though he suggested Russia could be trying to sabotage the agreed upon export mechanisms.

Four more ships loaded with grain set off from Ukrainian ports, as Moscow and Kyiv blamed each other for a new strike at a Russian-occupied nuclear plant https://t.co/tspKONHI57

“It is important for us that Ukraine remains the guarantor of global food security,” he had said at the time, given a recent Russian missile strike on Odessa.

The question of the safety of shipping crews also remains a concern, given the ships must navigate waters which have for months seen explosive mines placed off Ukraine’s coast. The Razoni’s safe passage through the Black Sea days ago was a big milestone showing the UN safety mechanisms can work.