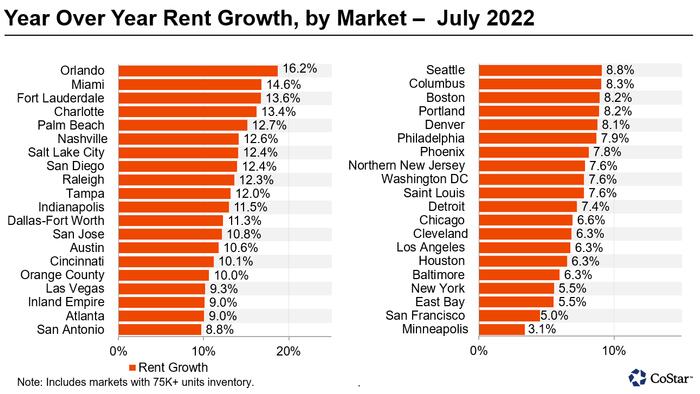 
The housing and renting market continues to teeter on the brink, and the newest incoming data doesn’t offer up any clear signs of stabilization. In fact, new data continues to suggest the opposite: that volatility in housing could only be beginning…and that we’re going to have plenty of fodder on deflation, which we have talked about frequently, invoking the effects of a “reverse bullwhip” on the economy.

A new report from Apartments.com examining multifamily rent growth trends for July 2022 shows that the Sunbelt markets are set up for what is being called a “a significant collapse of demand” heading into the back half of 2022.

Sunbelt cities, which had previously “dominated the top 10 rent growth markets in July with eight out of 10 located within the region” are now setting up for the fastest pullback.

Palm Beach is singled out as an example. The city has seen year over year asking rents falling from growth of 30.6% to now just 12.7% at the end of July 2022. Tampa and Las Vegas have also seen double digit pullbacks in rent.

Jay Lybik, National Director of Multifamily Analytics, CoStar Group, who owns Apartments.com, stated: “Throughout the month of July, while multifamily yearly rents continued to perform well above historical averages, the deceleration of rent growth quickened at a time when markets typically post their best results.”

He continued: “The deteriorating rent situation highlights a significant collapse of demand in the sector when new unit deliveries are projected to hit 230,000 in the second half of 2022.”

Over in the utopia brewing on the West Coast, places like San Francisco are bucking that trend. Rents in San Fran are just $18 below their all time peak of $3,116 that they set in Q2 2019, the report says. Rents were actually up by 40 bps over the last 30 days to grow 5%.

We’ll see how long that lasts…

Overall, however, the rental picture is “deteriorating”, according to the release:

Analysts have found that, looking sequentially, 12 markets saw absolute asking rents decline over the past month, the first occurrence since 2020. Miami led the charge with average asking rents down $11 during July, in addition to five markets that reported no change in rents over the last 30 days.

The stark reversal for Sunbelt markets can be seen vividly in the month over month chart. Markets that saw negative or flat rent growth in July are dominated by Sunbelt locations, including Fort Lauderdale, Austin, Orlando, Charlotte and Tampa, amongst others.