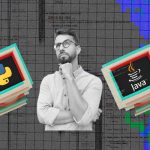 Python and Java Full stack developers are in-demand for the Software IT Industry. Let’s explore more

Java Full stack developer is the in-demand for the Software IT Industry. Today’s tech companies need developers who just do not code but are also good solution architects, developers, testers, and designers. Full Stack Java Developer position is one such end-to-end developer who takes care of end-to-end product development with expertise in Java and other related technologies. Here are certain skills you need to learn to become the best Java Full stack developer:

It is critical for Java developers to master JVM internals – what are the different JVM elements and how they function, JIT, JVM options, garbage collections, collectors, etc.

A database is where all the project data is stored securely. It helps different teams work collaboratively on the same project and be well-aware of the progress.

Java full stack developers are expected to be familiar with common DevOps tools like Maven, Docker, Ansible, and Kubernetes. DevOps is a must-have skill for professional developers.

Developers should know the structural elements and user interface elements of the web application like – DNS or Domain Name System, Database Servers, and Cloud Storage.

Python is designed to promote code readability. It is simple, straightforward, and versatile; making it the ideal choice for a wide range of projects, from simple web applications to operating systems. A full-stack developer works on the frontend and backend. In simple words, a full-stack developer creates a website that has an effective look and efficient functionality.

Expert Python developers should have in-depth knowledge of the front-end languages such as JavaScript, HTML5, and CSS3 and understand their potential.

They should be familiar with different ways to debug, for example – printing out variable values, modifying the path of the program, and using a debugger.

Having mastery over ML and AI algorithms can give developers a competitive edge in a world where data science is at the center of it all.

Understanding how to leverage Python Shell is incredibly important because it can help developers save a lot of time when it comes to testing the newly written codes.