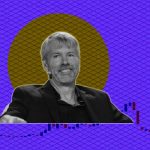 MicroStrategy’s founder, Michael Saylor, will step down as CEO after the enterprise software maker took a quarterly impairment charge of more than US$900 million related to the drop in the price of bitcoin. Saylor will take on the newly created role of executive chairman, the company said in a statement late Tuesday that accompanied its second-quarter results.

“As executive chairman, I will be able to focus more on our bitcoin acquisition strategy and related bitcoin advocacy initiatives,” Saylor said in the statement, adding that the roles of chairman and CEO would be split.

The move comes as MicroStrategy had posted a cumulative impairment loss of nearly US$2 billion on its cryptocurrency holdings. As of the end of 2022’s second quarter, the firm held about 129,699 bitcoins, which were acquired at an average price of nearly US$30,700 per unit.

Under the US generally accepted accounting principles, or GAAP, the original cost of MicroStrategy’s digital assets was roughly $4 billion. But at the current price, the company’s bitcoins are worth less than US$1.9 billion. This means that the Nasdaq-listed firm would make nearly US$2.1 billion in loss of all BTC holdings sold today.

Microstrategy has two corporate strategies: business analytics and bitcoin. The bitcoin strategy is to “acquire and hold bitcoin long-term; purchase bitcoin through use of excess cash flows, and debt and equity transactions,” according to the company’s Q2 financial results presentation.

MicroStrategy’s CFO Andrew Kang said during the earnings conference call that the company has about 85,000 unpledged bitcoins available, giving the company more than enough collateral to meet ongoing requirements of its Silvergate term loan through “any foreseeable price volatility.”

The post MicroStrategy CEO is Stepping down and Investors Are up for a ‘Short Squeeze’ appeared first on .