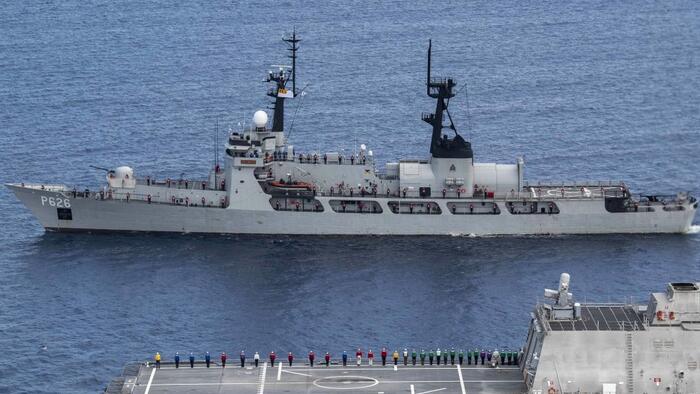 
Nine Sri Lankan Navy sailors who’d participated in a massive joint naval exercise in the Pacific Ocean have jumped ship in a bid to stay in the United States.

Sri Lanka has been gripped by an economic crisis that led then-President Gotabaya Rajapaksa to resign and flee the country on July 13, after hordes of protestors stormed the official presidential residence. On Wednesday, the Sri Lankan parliament ratified a state of emergency declared by new President Ranil Wickremesinghe, as he seeks to quell demonstrations and unrest.

According to Economy Next. the sailors left Sri Lanka on June 4 as part of a 50-person contingent that was taking part in the massive, 26-country Rim of the Pacific (RIMPAC) joint naval exercise between Hawaii and Southern California.

Following the training, the sailors were slated to return to their country on a Sri Lankan ship that was a gift from the United States. The vessel — which was previously the U.S. Coast Guard cutter Douglas Munro and for now is identified only as “P627” —  was officially transferred to the Sri Lankan Navy in October, but has been undergoing restoration in the United States.

“A big crew went to the USA to bring in a ship that was donated to the Sri Lanka Navy,” an official Sri Lankan source told Economy Next. “From that crew, nine people have gone missing.”

While reporting does not indicate where they slipped away from their crewmates, earlier coverage of the transfer of the vessel said it was expected to depart for Sri Lanka from Seattle in May. The sailors represent a variety of ranks and ages between 27 and 36.

“We understand that several sailors have absconded from the training, a matter that has been referred to U.S. law enforcement,” a U.S. embassy spokesman told Economy Next. “Individuals who break U.S. immigration laws can be subject to arrest, detention, and deportation, and those who accrue unlawful presence in the United States can be prevented from returning to the U.S. for up to 10 years.”

The sailors are among many Sri Lankans trying to start new lives somewhere else, with boats venturing not only to India but as far away as Australia, which is some 3,500 miles away.

Footage emerges said to be of President Rajapakse fleeing Sri Lanka aboard a Navy Vessel. pic.twitter.com/yvaYv5uGvB