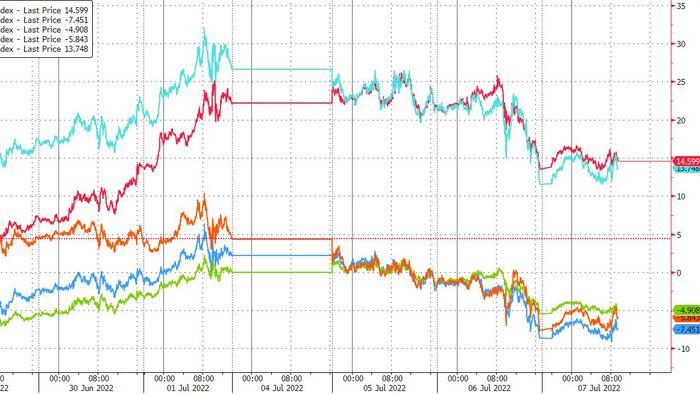 The shift from inflation to recession fears continues to dictate the pace of trading. As an indicator of US recession risks, the Treasury curve is inverted again, with the 2s10s spread at -5.7bp.

And European money markets continue to lower their expectations of the ECB’s hiking cycle. Although the day-on-day change doesn’t show it due to a late-afternoon recovery, almost a full 25bp rate hike had evaporated from the 8th ECB-dated €STR forward swap that corresponds to policy one year ahead.

Worse, as our Rates Strategists noted yesterday, the corresponding slide in short-dated Bund yields is not reflected in break-even rates nor in EUR inflation swaps. In other words, the concerns are fully recession driven, while inflation concerns aren’t abating either – a true headache for central banks, as we have been warning.

European data did little to soothe these worries. Eurozone retail sales continue to hold up better than consumer surveys suggest. Although sentiment has been near the pandemic lows, indicating that consumers are already feeling the pain, actual spending continues at a modest pace so far. Nonetheless, momentum is slowing, as German factory orders indicated once again yesterday. This Bloomberg article on the aluminium market is perhaps the best illustration we’ve seen of the European cycle post-Covid: from supply chain disruptions that led to over-ordering and therefore rampant prices, to slowing orders currently as factories have either restocked their raw materials and/or are expecting less consumer demand – making them hesitant to add to inventories.

Whereas markets and businesses continue to shift their focus from inflation to recession risks, the minutes of the June FOMC meeting revealed that the US central bank is mostly worried that inflation could become entrenched. To avoid this, the FOMC will prioritize its price stability mandate over its goal of full employment. In practise, this means continued hikes, and participants concluded that an even more restrictive stance could be appropriate if elevated inflationary pressures were to persist. As our US strategist summarises once again, we believe that a recession is basically collateral damage in the Fed’s mission to stamp out inflation. Additionally, this time the Fed will probably not succumb to the pressure to slash rates back to zero as soon as the economy falters. That realization should only amplify the market’s concerns about the economic outlook.

While the Fed’s experience –how did we ever get from ‘transitory’ to ‘entrenched’?– serves as a warning for its peers, the bright spot of a more aggressive FOMC is that the ECB might just manage to get away with less tightening, possibly allowing European policymakers to take a little more care of the economy. If the Fed squeezes the life out of the US economy, that will undoubtedly have a global impact. It may therefore cool global aggregate demand just enough to take the biggest sting out of inflation. Yet, as the decline in the euro over the last week highlights, the ECB will obviously understand that a free ride does not exist.