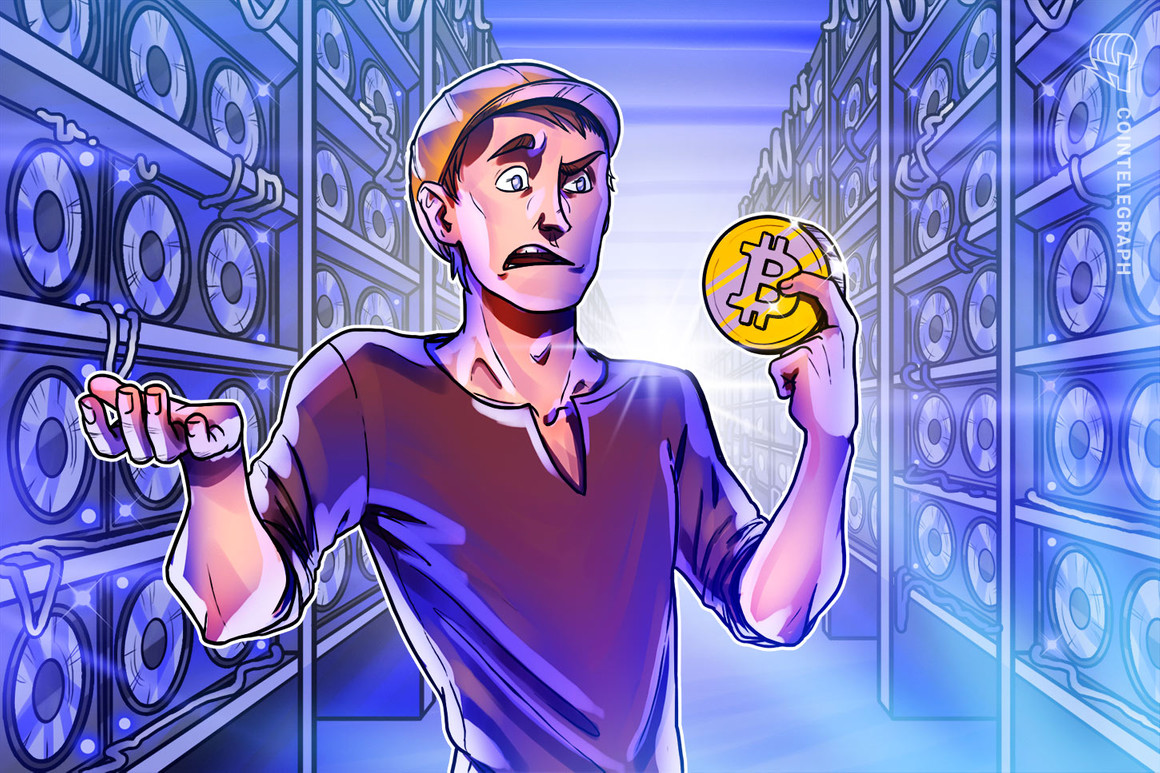 Crypto companies are going belly up left and right and Bitcoin mining companies also appear to be taking on water faster than they can bail. In mid-June, Compass Mining CEO Whit Gibbs and CFO Jodie Fisher abruptly resigned after allegations that the Bitcoin mining hardware and hosting company had failed to pay hundreds of thousands of dollars in overdue electricity bills to Dynamics Mining, a facility provider for Compass.

Bloomberg recently reported that many industrial-size Bitcoin miners took on a significant amount of debt by leveraging their equipment and BTC as collateral for loans to either acquire additional gear or expand their operations. According to the report, and data from Arcane Research, miners owe some $4 billion in loans and now that Bitcoin price trades near its 2017 all-time high, the trend of miners liquidating their BTC holdings at swing lows to cover capital costs and operational costs is expected to pick up speed.

In the last month Marathon Digital, Riot Blockchain, Core Scientific, Bitfarms and Argo Blockchain PLC have each sold between 1,000 to 3,000 BTC to cover debts, operational (OPEX) and capital expenses (CAPEX).

The troubles faced by miners is also having a knock-on-effect on ASICs and their pricing at major mining hardware merchants like Big Sky ASICs, ASIC Marketplace, Bitmain and Kaboomracks shows popular top and mid-tier ASIC miners selling up to 70% down from their all-time highs in the $10,000 to $18,000 range.

With data from Arcane Research showing publicly traded industrial miners now selling more Bitcoin than they mined in May, it’s possible that some will either reduce their footprint and scale back, or go out of business if they are unable to cover OPEX and CAPEX debt.

According to Jaran Mellerud, a Bitcoin mining analyst at Arcane Research:

“If they are forced to liquidate a considerable share of these holdings, it could contribute to pushing Bitcoin price further down.”

Of course, news headlines and tweet threads only ever tell a small part of the story, so Cointelegraph reached out to Luxor Technologies head of research Colin Harper to gain clarity on how industrial miners view the current situation.

Cointelegraph: Bitcoin is trading below realized price and at times it’s dipped below miners cost of production. So far price has struggled to hold above the 2017 all-time high and the hashrate is dropping. Typically on-chain analysts pinpoint these metrics hitting extreme lows as a generational purchasing opportunity. What are your thoughts?

Colin Harper: I don’t really like telling folks when and when not to buy. That said, I never thought we’d see $17,000 BTC again. Anything around or under $20,000 seems like a good deal to me, but I’m also preparing for lower prices should that happen.

CT: What is the state of the BTC mining industry right now? There are miners liquidating their stack, leveraged miners might go bust, sub-optimal miners are turning off their rigs and ASICs are currency on a firesale. Listed miners’ stock price and cash flow is looking pretty bad right now. What’s happening behind the scenes and how do you see this impacting the industry of the next 6 months to a year?

CH: The short, straight, and skinny: profitability is in the toilet, so miners with too much debt, high operational costs, or both are being shaken out. Hashrate will grow much more slowly this year than anticipated as a result of the profitability crunch, ASIC prices will continue to fall, and a lot of new miners who hopped on the hash train last year will be thrown off. Miners with all-in costs at or below $0.05/kWh are still mining with fat profit margins.

The long, lumpy, and fat:

In 2021, Bitcoin mining profitability hit multi-year highs. At the same time, interest rates were still low and miners took on debt to finance hashrate expansions during this profitability boom. Now, things have changed: profitability is slipping toward all-time lows, interest rates are rising, energy prices are skyrocketing, and all indicators point towards a global recession. Plenty of miners signed hosting contracts, power purchasing agreements, and other operational agreements using 2021 profitability models, not factoring in the current conditions. Now that bull market conditions have flipped and the bear market is here, miners with higher costs and untenable debt are starting to liquidate their operations.

Still, we haven’t heard of any miners having equipment seized and forced liquidation. There’s plenty of self-imposed selling from miners who got ahead of themselves last year, but plenty of public miners are still mining at healthy margins.

As for the next six months, some miners, both public and private, will become insolvent, so we expect bankruptcies and plenty of mergers and acquisitions in the year to come. With energy prices high and rising, miners will have to get smart to lower costs and find cheaper sources of power. Off-grid miners will thrive in the years to come.

To illustrate this with data:

Hashprice is a metric from Luxor’s Hashrate Index which is used to calculate the expected revenue of a unit of hashrate when a miner is using a Full-Pay-Per-Share (FPPS) pool like Luxor. Hashprice is denominated as $ per terahash per day, whereas terahash refers to the speed at which a bitcoin mining machine produces computations. At $0.09/TH/day, a 100 TH machine would earn $9 per day when using Luxor or a similar FPPS pool.

CT: Exactly why is now a good or bad time to start mining? Are there particular on-chain metrics or profitability metrics that you’re looking at or is it just your gut feeling?

CH: Given that hashprice is nearing all-time lows, it’s a rough time to start mining, but the bear market will give shrewd investors the opportunity to lay the groundwork to flourish in the next bull market.

Machine prices are falling drastically, so it’s becoming much more affordable to purchase a new generation machine (Luxor’s ASIC Trading Desk has folks selling Whatsminer M30 and Antminer S19 series rigs for $30-50/TH). Of course, there’s a reason that the rigs are getting cheaper, and that’s because they’re making 1/3rd of what they made last year (and they will likely make even less than that when this bear market is said and done). I expect machine prices to come down lower still.

Now all of that said, if you can find favorable power rates and/or a good hosting agreement, the next few months will likely provide favorable ASIC prices for those looking to bootstrap a mining operation. The bear market will be a great time to position yourself for the next bull run.

Related: Bitcoin’s bottom might not be in, but miners say it ‘has always made gains over any 4-year period’

CH: Definitely not a good time to try to set up a home mining operation. As for deploying capital on an industrial scale, it really depends on the site and the expertise of the folks running it.

CT: Would you say that right now is a good time for home-based miners to get in the game? Say a regular joe looking to run two Antminer s19j Pros with an immersion set up?

CH: Unequivocally no. If it were me, I would wait until ASIC prices drop further. Even then, I would want to make sure that I could do something to optimize ASIC efficiency to improve ROI (for example, if you can recycle heat to heat your home, and thus not pay for heating in the winter or something, then you are actually accelerating ROI because you are earning BTC and covering heating costs that you would have to pay for anyway).

CT: How could the upcoming Bitcoin halving alter the landscape of industrialized mining and the amount of equipment required to solve an algorithm that becomes more difficult to crack with each halving?

CH: Bitcoin miners will try to increase their hashrate as much as possible before the halving. Rising energy prices and low profitability will hamper this (some), but miners with cheap costs and conviction will grow their fleets accordingly. In terms of industrialization, it certainly seems like mining is heading that way, though I think the equation changes once energy producers (oil companies, renewables farms, power authorities, etc) start mining bitcoin at scale–power costs and recessionary pressures could limited the scope and scale industrial mining that we see with the Riot Blockchain and Core Scientific-size miners in the industry.

Disclaimer. Cointelegraph does not endorse any content of product on this page. While we aim at providing you all important information that we could obtain, readers should do their own research before taking any actions related to the company and carry full responsibility for their decisions, nor this article can be considered as an investment advice.